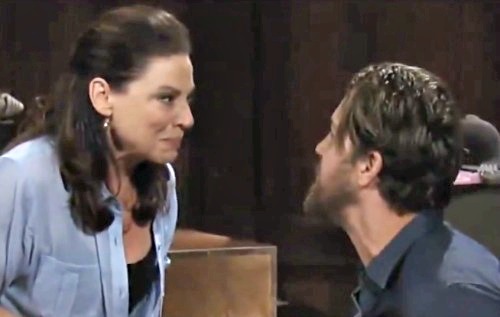 General Hospital (GH) spoilers tease that Liesl Obrecht (Kathleen Gati) will face major legal consequences. Nina (Michelle Stafford) will have to own up to her actions as well, but she should fare much better than her devious aunt. Liesl was the orchestrator of Peter’s (Wes Ramsey) kidnapping and time in captivity. She also set the fire that nearly killed both Peter and Nina.

Now that this GH storyline is wrapping up, Kathleen Gati is ready to spill. In an interview with Soap Opera Digest, Gati dished on her role in this hot plot. She had plenty to say about the ruthless plan Dr. O put in motion. For starters, Gati was asked about the surprising fan support. She braced for hate after the hostage story kicked off, but she actually got loads of praise instead.

“I’m thrilled, but also shocked,” Gati said. “I would have hated me! But everyone is on Team Obrecht, so yay! It’s fantastic.” It probably helped that Peter isn’t necessarily a fan fave. He’s certainly got some support out there, but he’s still a newer character who played a role in Nathan’s (Ryan Paevey) demise. Peter also deceived Maxie (Kirsten Storms) for months, so he deserved to suffer a little.

Speaking of Peter, what did Gati think about working with his portrayer? She had nothing but good things to say about Wes Ramsey. Gati also loved all the extra scenes with Michelle Stafford. “Working with him and Michelle for the past few months has just been a dream,” Gati gushed. “They are dedicated, hard-working, focused and open to working together.”

Gati also shared a funny story from the first day of cabin filming. Her introduction to Ramsey was definitely memorable. “They’re tying him up and I’m like, ‘Hi, I’m Kathleen, I’m going to be torturing you, I apologize ahead of time.”

Many General Hospital fans cracked up at Gati’s dialogue during the lighthearted scenes. Gati admitted that she often had to get the giggles out in rehearsal. She thought the whole storyline was a real hoot. “This was right up Obrecht’s alley and mine, too,” Gati said.

General Hospital’s moving on now, but other fun twists and turns are undoubtedly in the works. We’ll give you updates as other GH news comes in. Stay tuned to the ABC soap and don’t forget to check CDL often for the latest General Hospital spoilers, updates and news.