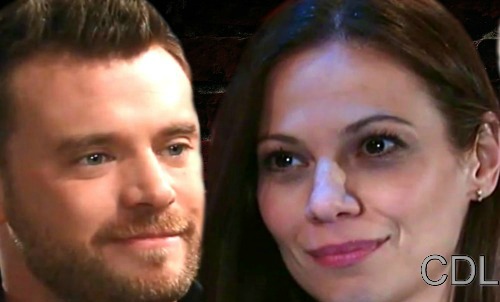 General Hospital (GH) spoilers tease that Drew (Billy Miller) and Kim (Tamara Braun) will come together over a blow. Oscar (Garren Stitt) intends to get emancipated with Alexis’ (Nancy Lee Grahn) help, so that’ll bring more family drama. The teen just wants a chance to control his own fate, but it’s going to bring some serious problems.

When Oscar refuses to back down, that’ll really sting for Kim and Drew. These could be their final months with Oscar, so they won’t want to spend them stuck in a legal battle. Of course, the bigger issue will be Oscar’s life-saving treatment. The clinical trial is all the hope he has left in this world. If Alexis succeeds, Oscar will have the freedom to turn down his spot.

General Hospital spoilers say Drew and Kim will try to fight this. Sam (Kelly Monaco) will even pitch in at some point. Kim will seek assistance from Drew’s ex and count on it paying off. She may think Sam can talk Alexis into dropping the case, but that probably wouldn’t help much. Oscar would just go to Scott (Kin Shriner), who’s more willing to play dirty for a win.

Kim may eventually run out of options. Since Alexis is a top-notch attorney, she has a good shot at achieving a victory. What happens if Oscar indeed gets emancipated and rejects the experimental treatment? He might change his mind in the nick of time, but Drew and Kim would be wrecked until then.

Julian (William deVry) solved the puzzle for the most part, so he knows Oscar’s quite ill. He wants to be there for Kim, but it may be easier for her to lean on Drew soon. As Oscar’s parents, they’ll be the only ones who can really understand. If Oscar actually ends up dying, that’d be another way to push them together.

Drew still relies on Sam often, but her reunion with Jason’s (Steve Burton) on track for now. Margaux (Elizabeth Hendrickson) managed to infuriate Drew, so she’s off the table for the time being. GH might as well let Drew and Kim hook up. Some grief sex may be just what the doctor ordered!

Whether Oscar kicks the bucket or not, his actions could lead his parents to the bedroom. Could a moment of weakness destroy Kim and Julian’s romance? Could it make Drew more eager to recapture his lost memories?