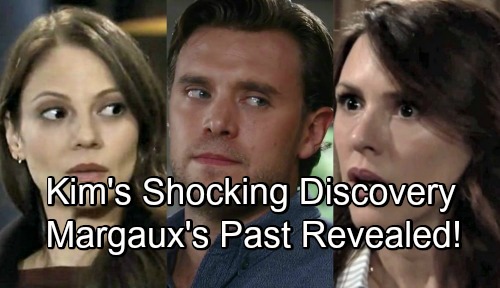 General Hospital (GH) spoilers tease that Kim (Tamara Braun) will ponder a mystery. After Thursday’s encounter with Margaux (Elizabeth Hendrickson), Kim won’t be able to shake a strange feeling. She’ll believe she knows Margaux from somewhere, but it looks like she’ll struggle to connect the dots. Kim will think Margaux seems incredibly familiar, but where does she know her from?

Whenever a new character’s introduced, he or she always has a few secrets. Take Chase (Josh Swickard) for example. Not long after his debut, GH revealed his connection to Finn (Michael Easton). The fact that they’re brothers gave Chase a tie to someone on canvas. Next, General Hospital gave Chase a backstory with Nelle (Chloe Lanier). That was another way to flesh out the character.

It sounds like they have a similar goal in mind with Margaux. As we learn more about her past, we should also find some startling connections. Kim could end up being one of those – at least in a roundabout way. What if Kim doesn’t remember meeting Margaux in person? Could Kim have actually seen a photo of Margaux instead? If so, GH could put together some interesting puzzle pieces.

Before Hendrickson first appeared as Margaux, some leaked casting sides pointed to a new love interest for Drew (Billy Miller). The names were disguised, but the scene involved a very Drew-like character and his high school sweetheart. What did Margaux and Drew discuss in one of their early flirting sessions? Drew’s high school reunion. It’s possible there’s a link here.

Back when Drew and Kim were dating, he might’ve mentioned his high school girlfriend. He may have even had a picture of her in his wallet or a yearbook. Since Kim and Drew knew their romance was a temporary thing, talking about exes wouldn’t have been a big deal. They didn’t feel the pressure of trying to put the past behind them and make something work long-term.

Perhaps Margaux’s been less than truthful about her ties to Drew. She always seems to pop up where he’s hanging out. Margaux has also done her research on Drew’s memory-mapping ordeal and now has the flash drive. There’s evidence to suggest Margaux’s hung up on Drew and could stalking him just a bit.

Since Drew doesn’t remember his history, he’d have no way of knowing who Margaux used to be to him. That could be one reason Margaux’s keeping that flash drive in her possession. There may be a few things she’d rather keep Drew in the dark on.