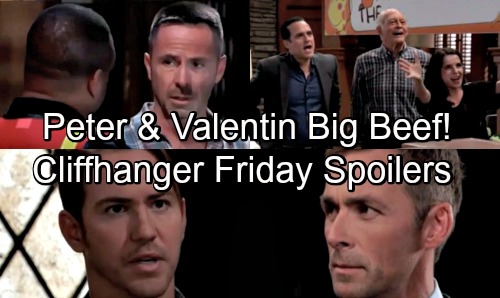 General Hospital (GH) spoilers for Friday, August 17, tease that Julian (William deVry) will get some bad news. A construction worker will have some disappointing updates, so Julian should learn that his expansion plans have stalled. Jason (Steve Burton) and Sonny (Maurice Benard) will keep holding Julian off as long as they can, but you can bet he’s going to cause plenty of problems.

For now, Sonny will have a party to attend. Mike (Max Gail), Bobbie (Jacklyn Zeman) and Sam (Kelly Monaco) will all join in the celebration. Perhaps they’ll want to give Carly (Laura Wright) a proper homecoming bash. Regardless, Sonny and the gang will gather and yell, “SURPRISE!” They’ll catch their guest off guard and have some fun in Friday’s episode.

Elsewhere, Margaux (Elizabeth Hendrickson) will meet up with Drew (Billy Miller). She’ll bring up an issue she’s dealing with before asking for Drew’s help. Is this about her Sonny takedown mission? Drew isn’t as close to Sonny as he used to be, but he still wouldn’t be on board with the idea. Margaux will either have to be sneaky about what she requests or offer an irresistible incentive.

GH fans know Margaux’s still got the flash drive, so she’ll have something to use as leverage eventually. It’s easy to see that Margaux’s one determined gal. If there’s a way to use Drew to her advantage, she will. Margaux intends to destroy Sonny or crash and burn trying!

Other General Hospital spoilers say Maxie (Kirsten Storms) will face a difficult task. Nina (Michelle Stafford) will wonder if she’s sure about this, but Maxie will insist that she is. She’ll contend that this is something Nathan (Ryan Paevey) would want her to do. It looks like they might be preparing for a prison visit, so maybe they’ll take turns speaking with Madeline Reeves (Donna Mills).

Maxie may want to discuss Nathan’s death with Madeline and provide some closure. Of course, we also know Valentin (James Patrick Stuart) will pay Madeline a visit soon. General Hospital spoilers state that Madeline’s info will help with Valentin’s goal. He just might be able to win back Nina thanks to Madeline’s secrets.

In the meantime, Valentin will have to deal with Peter (Wes Ramsey). On Friday, Peter will show up and declare that Valentin owes him. He’ll contend that he’s there to collect, but will Valentin fulfill his demands? We’ll keep you posted as other GH details emerge. Stay tuned to the ABC soap and don’t forget to check CDL often for the latest General Hospital spoilers, updates and news.