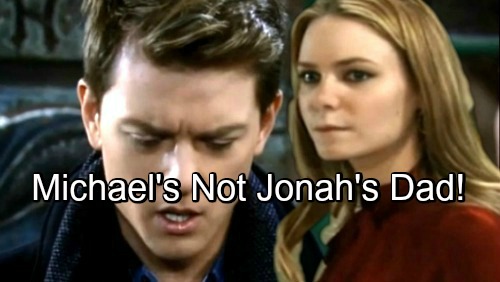 General Hospital (GH) spoilers tease that Brad (Parry Shen) will worry about the secret he’s keeping. He’s got anxiety for several reasons at the moment. For starters, Brad feels guilty for letting Michael (Chad Duell) believe his son’s gone. Since Brad experienced the heartbreak of holding a dead baby in his arms, it makes it even more crushing to put Michael through all this.

The fact that Brad’s in on a scheme with Nelle (Chloe Lanier) is another cause for concern. She’s the last person he needs to be mixed up with. Lucas (Ryan Carnes) are clearly right to fret over their friendship! Brad could face charges once the truth comes out and blow any future adoption plans.

Of course, Brad also has to worry about his relationship going down in flames. Lucas could leave him over this shocking revelation. Giving the baby back could be something they just can’t overcome. As far as more pressing issues go, Brad’s fretting over the birth mom demanding her kid back. General Hospital spoilers suggest that’ll actually happen soon.

However, Brad may find a way around that drama. GH might want to keep this storyline going for a while, so the birth mom could change her mind once more. If Brad can get in touch with her and explain how much they love “Wiley,” maybe the birth mother will decide she can’t break up their new family.

Brad would dodge one bullet, but that doesn’t mean he’ll get away with his deception. General Hospital spoilers hint that Julian (William deVry) will likely learn the truth. He’ll probably keep the secret to protect Lucas, but it’ll still provide another opportunity for exposure. Eavesdropping and slipups are always a problem on soaps.

At some point, Michael will have to find out this bombshell. He may uproot Jonah from his life with “Brucas” and leave them in great pain. That’s when more chaos could hit. In an interview with Michael Fairman, Frank Valentini offered some interesting clues about this storyline. GH’s executive producer noted that fans will be surprised by what’s in store.

“This one has a twist on a double twist,” Valentini said. “It’s a triple-axel! It will be gut-wrenching, for sure.” Let’s think about what that might mean. The first twist was probably Nelle exchanging her live kid for a dead one. When a baby switch goes down, it’s usually the other way around!

The second twist could be the inevitable one. As with any good baby swap, the real story has to be revealed. What could the third twist involve? Could it be that Michael isn’t really the father?! That might be a way to potentially keep “Wiley” with Brad and Lucas in the end.

Nelle might not have been certain about the “baby daddy.” She could’ve just bribed someone to say her child was Michael’s no matter what. It wouldn’t be the first time a paternity test was tampered with. That’s the norm on a soap.

Is this how General Hospital will fix Brad’s mess? Will Michael’s sorrow turn to joy and back to sorrow again? Will he learn he never had a son at all? We’ll give you updates as other GH news comes in. Stay tuned to the ABC soap and don’t forget to check CDL often for the latest General Hospital spoilers, updates and news.