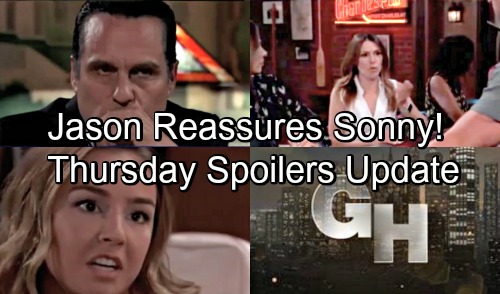 General Hospital (GH) spoilers for Thursday, August 16, tease that Jordan (Vinessa Antoine) will warn Curtis (Donnell Turner) about his meddling aunt. Stella’s (Vernee Watson) getting on Jordan’s last nerve, so Curtis’ fiancée will want to get a few things straight. Jordan will make it clear that she’s not going to tiptoe anymore. Stella will just have to accept their engagement and butt out.

Meanwhile, Michael (Chad Duell) will struggle with his emotions. He’ll try to tackle his Jonah meltdown alone, but Stella won’t let him. She’ll suggest that Michael’s just like his dad, so she may be referring to Sonny’s (Maurice Benard) stubborn attitude. Michael needs to let himself mourn and ask for help when he needs it. Throwing himself into work isn’t doing him any favors.

At GH, Liz (Rebecca Herbst) will tell Terry (Cassandra James) her troubles. She’ll likely bring up Cameron’s (William Lipton) walk on the wild side. Liz might find herself fretting over Griffin’s (Matt Cohen) suspension and Kiki’s (Hayley Erin) pain as well. Kiki may have won her court case, but that won’t end the pressure at work or the drama with Ava (Maura West).

While Terry offers a kind ear, Sam (Kelly Monaco) will listen to Kristina’s (Lexi Ainsworth) issues, too. General Hospital spoilers say Kristina will come clean about Parker (Ashley Jones). It looks like they’ve been drifting apart lately. Unfortunately, Kristina will suspect cheating is the reason why. She’ll probably wonder if it was a mistake to rush into a relationship and move all the way to Oregon.

At home, Carly (Laura Wright) will push Josslyn (Eden McCoy) to tell her why she shoplifted. She won’t understand why Joss would do something so reckless, especially when they’ve got plenty of money. Joss acknowledged that fact during her chat with Oscar (Garren Stitt), so she should do the same with Carly.

However, Josslyn will go a little deeper this time. She feels like her world’s been crumbling lately, so she’ll cry and spill everything she’s been dealing with. Carly’s Ferncliff stint definitely took a toll, but Josslyn should get the support she needs now that her mom’s free.

Other General Hospital spoilers say Jason (Steve Burton) will provide reassurance. During a discussion with Sonny (Maurice Benard), Jason will promise that they can handle their latest problem. He might be talking about Julian’s (William DeVry) snooping and the corpse that’s buried under Charlie’s Pub.

Speaking of Charlie’s Pub, Margaux (Elizabeth Hendrickson) will show up there in Thursday’s new GH episode, August 16. When she hears Kim (Tamara Braun) and Julian mention Sonny, Margaux will wander over to learn more. She’ll hope for any tidbit that might help her put the mob boss behind bars.

Does Margaux just want justice or could her history tie to Sonny in some way? Did he do something to her family in the past? General Hospital has been known to throw in some backstory twists, so stay tuned. We’ll give you updates as other GH news comes in. Stick with the ABC soap and don’t forget to check CDL often for the latest General Hospital spoilers, updates and news.