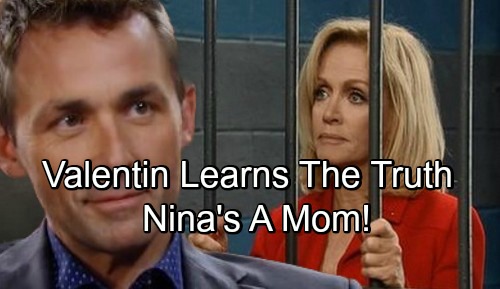 General Hospital (GH) spoilers tease that Valentin (James Patrick Stuart) will stop by to see Madeline Reeves (Donna Mills) in prison. Naturally, he’ll have Nina (Michelle Stafford) on his mind. Valentin has a plan to win Nina back, but it won’t be easy. He’ll feel like Madeline may be able to help in some way, so he’ll speak with her at the state pen and hope things pan out.

Once this visit wraps up, Valentin will feel better about his reunion chances. It sounds like he’ll score some info that he can use to his advantage. What will Valentin learn? There are several ways for GH to take this story, but there definitely seems to be a tie to the past. Madeline’s involvement should be a clue that this involves Nina’s history.

General Hospital fans know that Nina supposedly had a miscarriage after going into a coma. Her life was on hold for over 20 years, but she clearly came roaring back. Unfortunately, Nina found out she couldn’t have kids of her own. She gave it her best shot, but she’s given up on ever having a child.

Of course, it’s possible Nina still has one out there somewhere. That miscarriage may not have been legit. If Valentin suspects that’s the case and gets confirmation from Madeline, that’d be a good reason for his confidence boost. Valentin would know that by reuniting Nina with her kid, she’d never be able to resist him. He’d just have to figure out a way to find this long-lost child.

Could Nina’s son or daughter be right under her nose? Kiki (Hayley Erin) would be in the right age range. We should also consider what’s currently playing out in her storyline. Ava (Maura West) is absolutely furious over Kiki’s betrayal with Griffin (Matt Cohen). Since Ava nearly derailed the sexual harassment trial, Kiki is no longer sorry. Their mother-daughter bond has been completely destroyed.

The timing could be a bit suspicious. Ava and Kiki loathe each other right as Valentin’s searching for answers. GH also seems to be highlighting the differences between Kiki and Ava. Despite Kiki’s mistakes, she doesn’t think she’s anything like her vicious mom. Maybe that’s because Ava isn’t her mom at all!