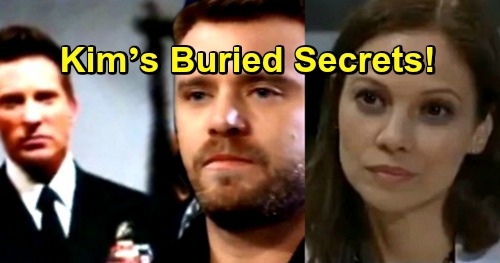 General Hospital (GH) spoilers tease that Drew’s (Billy Miller) past could contain some stunning secrets – and not just his own! His memories were wiped and replaced with Jason’s (Steve Burton), so he can’t really know what’s that flash drive. Drew has some tidbits thanks to Navy SEAL records and what Kim (Tamara Braun) has revealed so far. However, Kim may or may not be sharing the facts.

According to Kim, she had a hot fling with Drew in San Diego. It only lasted a few months, but she insists that it was incredibly intense. Kim makes it sound like they had a deep connection, but did they really or was that just her point of view? Drew did make Kim a CD, but that’s not exactly earth-shattering proof of some epic love story.

It’s a little weird that Kim’s been hung up on Drew for so many years. Oscar’s (Garren Stitt) a teenager and Kim still feels Drew’s pull. It sounds like she never really moved on after that fling. Who spends a few months with a guy and spends the next 15 years or so pining for him?

You could argue that Oscar kept the connection alive on Kim’s end, but the whole thing is still odd. Plus, Drew no longer looks like he once did and he has a totally different personality. He’s essentially a new person now, but Kim still admitted to wanting to be with him. When she got together with Julian (William deVry), they both acknowledged that they were in love with other people.

That was before Oscar’s cancer drama, so Kim appears to be a little obsessed. She plays the part of a calm and rational doctor, but maybe there’s a hint of crazy lurking underneath all that. Even if there isn’t, Kim may have been exaggerating the intensity of the romance. She could even be lying about some other sinister details. Who knows what kind of trouble Kim might’ve been in back then?

Kim might’ve been part of some things that she’d rather keep under wraps. If she was part of memory-mapping chaos or perhaps some other shady plot, that’d give her a reason to want the past to stay buried. General Hospital fans know that Kim’s against Drew having the memory procedure. It’s that because she’s genuinely worried about his safety or because she’s afraid of what he might recall?

Kim hasn’t exactly been a hit character since her debut. Tamara Braun is a perfectly fine actress, but Kim can be pretty bland. It’s led many viewers to wonder how long Kim will really last in Port Charles. If Oscar (Garren Stitt) dies, it could set up Kim’s departure, too. GH could take that story to some interesting places, especially if Oscar’s death drives Kim over the edge.

Braun also played the creepy and manipulative Ava Vitali on Days of Our Lives. She’s excellent in a villainous role, so it might be fun if they took Kim in that direction. Based on her stalkerish-sounding history, it wouldn’t be unreasonable. If Kim ends up leaving one day, she might as well go out with a bang!