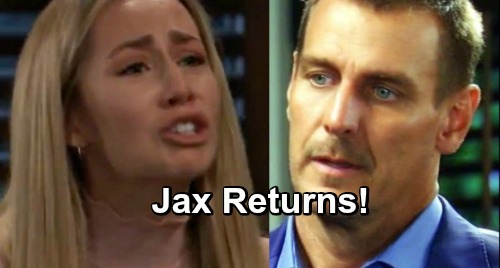 General Hospital (GH) spoilers tease that Jasper Jacks, also known as “Jax” (Ingo Rademacher), could show up in Port Charles in the next few months. General Hospital might think this is an appropriate time for Jax to help his daughter with Carly Corinthos (Laura Wright), Josslyn Jacks (Eden McCoy), deal with Oscar Nero’s (Garren Stitt) illness and treatment.

Jax hasn’t been to Port Charles or even in contact with his daughter since April, 2017 when Sonny Corinthos (Maurice Benard) had him deported. Sonny blamed his rival over his role in buying Nelle Benson’s (Chloe Lanier) kidney, which was transplanted in Joss, previously thought to be from a not so dead Jake Spencer (Hudson West).

Ingo Rademacher is suddenly available! Ingo had been at the CBS soap The Bold and The Beautiful playing Thorne Forrester for at least a portion of the time that Jax has been off the General Hospital canvas but he recently announced that his contract ended.

Ingo stated in an Instagram post that he’ll finish up his last episodes at The Bold and The Beautiful in January so this may also allow him to pop into GH for an arc as Jax!

Josslyn is going through the toughest time in her young life in recent months, after her first love Oscar Nero (Garren Stitt) first dumped her suddenly for no reason (as far as she knew at the time) she could fathom. Oscar invented a ridiculous story and involved Cameron Spencer (William Lipton) in helping convince Joss that he had dumped her for another girl.

That never sat right with Joss, and she retaliated by getting Cam to act as her fake boyfriend (although he’d like to be her real one)! Finally the truth came out and now she is supporting Oscar in what may yet turn out to be a terminal cancer case, even though he agreed to try the experimental immunotherapy trial – for Josslyn’s sake.

If Josslyn she needed her dad’s love and support up close, it is now and especially if the trial doesn’t work and Oscar dies! There is much speculation among GH fans that the Joss and Oscar story is the current version of Robin Scorpio (Kimberly McCullough) and Stone Cates (Michael Sutton), one of the saddest stories ever told on GH.

So will Ingo Rademacher pop in as Jasper Jacks in the next few months while he’s free from The Bold and The Beautiful? Keep watching GH and checking General Hospital spoilers frequently for the latest developments!