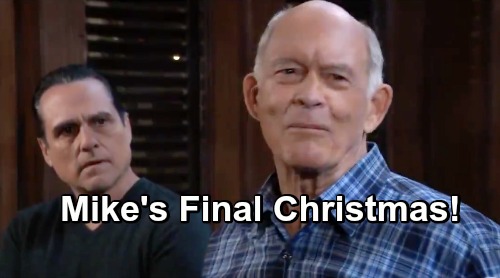 General Hospital spoilers tease that this may be Mike Corbin’s (Max Gail) last Christmas…or at least his last one with any of his mind left that would allow him to know that he’s Mike. The GH episode of Friday, December 14 Mike had at Turning Woods when he forgot Sonny Corinthos (Maurice Benard) was his son, and that he himself was Sonny’s father was tragic.

This memory loss along with his angry outburst that followed showed that Mike has entered the final stage of Alzheimer’s disease. Sonny is facing a situation with his dad where the rest of the mind goes, the patient loses himself, and finally his bodily functions are lost as well. In this stage, the patient is in a final decline, ending in death.

Sonny knows his father is fading – he mentioned to Carly Corinthos (Laura Wright) that the bad times were increasing and the good times were decreasing. Mike may soon be too much to handle at home at all, and will have to go into full-time Alzheimer’s care at Turning Woods.

General Hospital fans can only hope that Marcus Godfrey (Nigel Gibbs) and his jealousy won’t mean Sonny and Carly will have to find Mike a different facility, since Mike likes it there and is comfortable.

This is not the first time that GH has had an Alzheimer’s story. The plans are for a rebroadcast of an episode that aired December 23, 2005, when Lainey Winters’ (Kent King) father was revealed to have Alzheimer’s, and she was his caretaker.

Justus Ward (M’fundo Morrison) had been dating her, and she kept breaking dates and he followed her, thinking she was running around on him, when instead she had been taking care of her father. It is interesting that now when Mike Corbin is going into his final decline, that GH would choose another episode with an Alzheimer’s patient to air on their Christmas Eve episode, December 24.

Will General Hospital take viewers all the way to the end of Mike’s journey, or will he die from something else before he dies from Alzheimers? Time will tell so keep watching General Hospital and checking CDL for General Hospital spoilers frequently to see how this all plays out!