The Bold and the Beautiful Spoilers: Ingo Rademacher OUT at B&B – Lope’s Babymoon Brings New Faces, Returns and Shockers 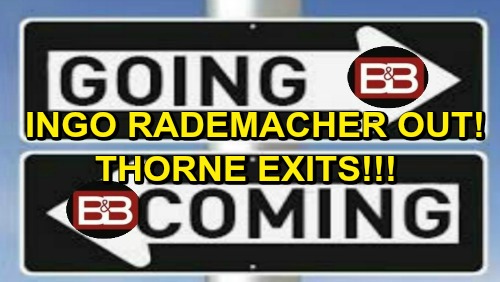 The Bold and the Beautiful (B&B) spoilers reveal that we’ve got some comings and goings to pass along. There’ll be plenty of special guest stars this week for both the Christmas merriment and a “Lope” vacation. First, we should mention that the Avants will be around for the holidays. Julius (Obba Babatunde) and Vivienne (Anna Maria Horsford) will stop by the Forrester mansion to help celebrate.

That’s great news since Maya (Karla Mosley) may be a bit blue this Christmas. She’s come to terms with her split from Rick (Jacob Young), but that doesn’t mean this is easy. Maya should enjoy putting the divorce drama on hold while she’s surrounded by family and friends.

Other Bold and the Beautiful spoilers say Brooke (Katherine Kelly Lang) will get a visitor she didn’t expect. She’ll be blown away when Bridget (Ashley Jones) walks through the door and offers a big hug. Brooke didn’t think her daughter would make it home for Christmas this year, but Bridget just couldn’t stay away. She’ll help the other Logan ladies put some fun into what’s left of the holiday season.

We’ll also see Charlie (Dick Christie) to pop up like he usually does this time of year. He’ll help Pam (Alley Mills) in the kitchen, but their blunders will force them to call in reinforcements. Next, let’s talk about Hope (Annika Noelle) and Liam’s (Scott Clifton) babymoon. After Hope suggests taking a trip to Catalina Island, they’ll make plans to catch their flight.

Unfortunately, Kelly will come down with a fever and force a delay for Liam. He’ll send Hope on without him so he can tend to Kelly with Steffy (Jacqueline MacInnes Wood). The Bold and the Beautiful spoilers say Christopher Knight will appear as Dr. Andrews, a pediatrician who was last on screen in 2010. Dr. Andrews may examine Kelly and let her parents know she’s going to be just fine.

Liam will get held up by terrible weather soon after. He’ll cross paths with some interesting characters as he tries to catch up with Hope. Monica Horan and Jim O’Heir will reprise their roles as Kieran and Matt Cannistra, that same pesky couple that always causes issues on planes. This time it looks like they’ll move their commotion to the airport instead!

Adela Tirado will also play an airport official while Ben Cain will serve as B&B’s pilot. The Bold and the Beautiful fans will see Carie Kawa as a hotel manager, too. This Catalina Island trip will bring early labor for Hope, so some shockers are looming.

Ingo Rademacher (Thorne Forrester) announced on his Instagram account Saturday afternoon, December 22 2018, that he has chosen to not continue his contract on The Bold and the Beautiful. Ingo’s final episodes as Thorne will be in early 2019 and he say a return is possible since everyone is on friendly terms.

Below is a quote from Ingo – CDL will continue to monitor the situation and report back when we learn how B&B plans to orchestrate his exit. Since Thorne is currently married to Katie (Heather Tom) he can’t simply vanish without any explanation.

“My Bold and Beautiful status. It is true what you are hearing and I think it’s time to set the record straight. I have decided to not continue with my contract on The Bold and The Beautiful and I’ll be finishing up my last episodes in January.”

That’s it for comings and goings this week. We’ll give you updates as other B&B details emerge. Stick with the CBS soap and don’t forget to check CDL often for the latest Bold and the Beautiful spoilers, updates and news.

My Bold and Beautiful status. It is true what you are hearing and I think it’s time to set the record straight. I have decided to not continue with my contract on The Bold and The Beautiful and I’ll be finishing up my last episodes in January. I want to thank Brad Bell( we’ve been communicating) the entire show and cast (truly awesome people) and also CBS for a fun year of playing Thorne. We are parting on good terms and with the possibility of a return. We shall see what the new year brings. Yes i have been in Hawaii for the last 2 month with my family working on my property and will continue to stay here throughout January but then it’s back to LA. #coffetalk