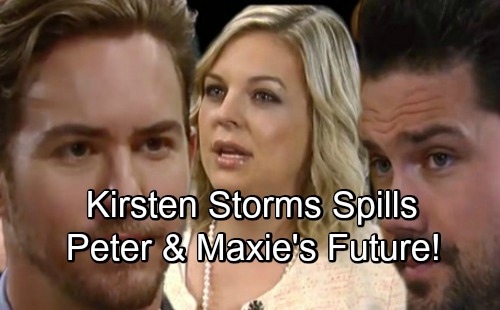 General Hospital (GH) spoilers reveal that Kirsten Storms has some great material coming up as Maxie. GH fans know her character’s been through a rough time. Nathan’s (Ryan Paevey) shocking death hit her hard, especially since she was pregnant with his baby boy. Of course, Peter’s (Wes Ramsey) lies were exposed and brought more misery.

Maxie also blamed her bestie for Nathan’s demise, which meant she couldn’t lean on Lulu (Emme Rylan) for support. Thankfully, these friends patched things up and Maxie’s life is moving forward. She’ll always love Nathan, but she can focus on James as well as her career. New love could even be in the mix down the road.

In an interview with SOD, Storms talked about Maxie’s past, present and future. For starters, she was asked about her emotional scenes following Nathan’s death and funeral. Although Storms was bummed to see Paevey go, she admitted she appreciated the gripping material.

Storms suggested that when she heard they were killing Nathan off, she knew portraying a pregnant widow would be “like gold.” Although Storms doesn’t submit for the Daytime Emmys very often, she revealed that she’s going to give it a shot this year. Storms is happy with how her performance turned out on screen, so she’s going to throw her hat in the ring and see how it works out.

Storms also discussed Maxie’s bond with Nathan and all the support for the pairing. She approved of what Ryan brought to the table. “He really made a very stoic, more controlled character to balance out Maxie’s ways,” Storms said. “She was the most normal in that relationship and the fan response to them was really sweet.”

However, Storms is on board for another GH romance whenever General Hospital wants to strike. Does she view Peter as boyfriend material for Maxie? “Absolutely! I like how they started out,” Storms said. She confessed that she thought Maxie and Peter’s connection happened awfully fast, but she thought it was OK in the end. Maxie was never truly flirting or showing romantic interest in him.

Storms argued that if you take gender out of the equation, Peter was just a good friend when she needed him. Could he become more down the road? Storms seems to think so. “As a girl, I like how he idolizes her,” Storms said. “I think it’s really cute, and I love working with Wes.”