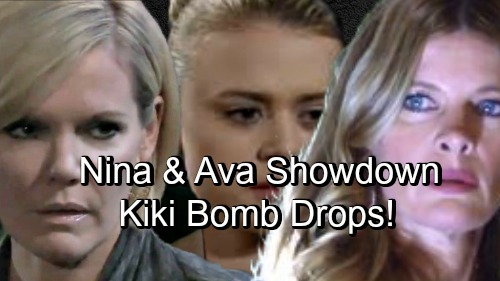 General Hospital (GH) spoilers tease that Nina (Michelle Stafford) will wrestle with a huge decision. She was clearly excited by the possibility that her child is still alive and well. Nina will grow even more eager to find her kid on Monday’s episode. She’ll be convinced that she’s got the right idea about Madeline’s (Donna Mills) clue.

Of course, Maxie (Kirsten Storms) won’t want to see Nina get hurt. She knows Nina longs for a child more than anything in the world, but she’ll think this whole story’s a stretch. Maxie will encourage Nina to dial down her optimism and really think about this. She’ll hope she can prevent devastation, but Nina will be desperate to meet her son or daughter.

Madeline claimed Nina had a little girl, which may or may not be true. You never know with Madeline! Assuming she was honest about the gender, that means Nina’s adult daughter is out there just waiting to be found. If you’re a loyal soap watcher, this isn’t your first rodeo with a long-lost child storyline. In cases like this, the child can often be found close to home.

General Hospital buzz hints that Nina’s daughter may be lurking just around the corner. Many GH fans suspect Kiki (Hayley Erin) might belong to Nina instead of Ava (Maura West). Some new clues certainly point in that direction.

For starters, the timing make sense. Ava hates Kiki’s guts now and Kiki isn’t too fond of her either! Their bond may be damaged beyond repair, so it’s the perfect opportunity to shake things up. Ava recently called Kiki a traitor and a whore, which is a pretty clear indication that she’s done with her.

Forgiveness is always possible on a soap, but it’s tougher with Ava. She doesn’t forget those who have wronged her. Ava would much rather get even, which is what she’ll continue to do in the coming weeks. Her bad attitude will even put her at odds with another General Hospital character, which brings us to our next clue.

General Hospital spoilers say that during the week of September 17-21, Ava will have a showdown with – you guessed it – Nina! Is it a coincidence that these two are suddenly going to interact? Probably not. There’s a good chance Nina will at least suspect Kiki’s her daughter eventually. It might be disproven, but it’ll be worth looking into.

However, Ava and Nina’s faceoff should go down beforehand. General Hospital spoilers say Ava will do some taunting during this confrontation. She may find out about Nina’s daughter search and poke fun. If so, that could be another big hint.

Is Ava keeping a massive secret? Will Kiki and Nina get the shock of their lives? We’ll give you updates as other GH news comes in. Stay tuned to the ABC soap and don’t forget to check CDL often for the latest General Hospital spoilers, updates and news.