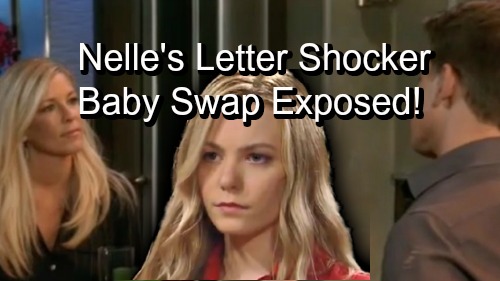 General Hospital (GH) spoilers tease that Michael (Chad Duell) will receive something disturbing. A letter will arrive from Pentonville, so he’ll immediately know it’s from. Michael told Nelle (Chloe Lanier) that he’d do his best to influence her sentencing. He vowed to push for mercy, but only because she was the mother of his child. After that, Michael fully intended to wash his hands of Nelle completely.

However, Nelle’s the snake that keeps creeping back. When she’s desperate, Nelle just can’t help herself. General Hospital spoilers say Michael may be tempted to leave the letter unopened. He was disgusted when he heard Nelle was trying to blame her actions on hormones. Kim (Tamara Braun) filled Michael in, but he suggested he didn’t need any updates in the future.

Since Michael’s even more fed up than before, it could make him hesitant to open up old wounds. Michael wants to put Nelle and the nightmares she caused behind him. Besides, she’s a grim reminder of what he’s lost. Nevertheless, the mystery of that envelope should leave Michael curious. He may wonder what Nelle could possibly have to say to him.

GH fans obviously want to know what’s in that letter, too. There’s no way General Hospital will leave us hanging indefinitely. If they let an offscreen character send a message, it has to be significant. There’s no other reason to come up with a plot point like this.

With that in mind, Nelle’s note could contain some crucial clues. She’s sitting on the secret of a lifetime at the moment. Only Brad (Parry Shen) and Nelle know the whole baby swap story. Julian (William DeVry) and Liesl Obrecht (Kathleen Gati) are in the loop on a little, but not enough to blow this wide open yet.

Brad has no intention of destroying his family, so that leaves Nelle to do the damage – at least for right now. What will she spill in this mysterious letter? Will she encourage Michael to visit her with the promise of info? Will she make a cryptic statement that’ll come into play later? Those are some good options here.

Regardless, you can count on Nelle to make a manipulative move. She’s undoubtedly hating her time behind bars, so she may think the “Wiley” revelation is her way out. Even if it’s not in this letter, Nelle may share part of the truth at some point. She could insist that Jonah’s alive and can be found if she walks free.