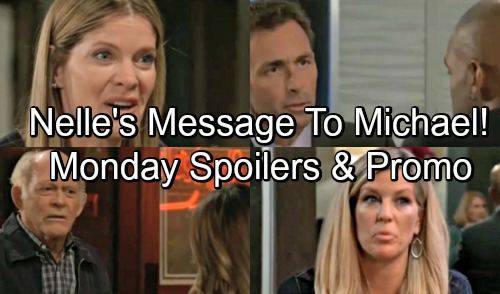 General Hospital (GH) spoilers for Monday, September 10, tease that Curtis (Donnell Turner) will get in touch with Valentin (James Patrick Stuart). He’ll have some important updates thanks to his chat with Carter Buckley. Carter didn’t know the identity of the person the baby ended up with, but he offered valuable confirmation. Valentin will marvel at the fact that Madeline (Donna Mills) told the truth.

Curtis will promise to keep following the trail and hopefully reunite Nina (Michelle Stafford) with her kid. Meanwhile, GH spoilers say Nina’s excitement will grow. She just found half a locket in a box of childhood belongings. After making some assumptions and taking a few leaps, Nina concluded that her kid could be alive.

Maxie (Kirsten Storms) will caution Nina about getting her hopes up, but it’s too late for that. Nina will insist that her baby’s out there. Of course, that baby is actually a grown woman by now. Maxie will worry that this search could end in heartbreak, but Nina will eventually feel like she has to look into this. She just needs to know for sure.

Elsewhere, Michael (Chad Duell) will deliver upsetting news. During a chat with Carly (Laura Wright), Michael will admit that Nelle (Chloe Lanier) wrote him from Pentonville. Naturally, Carly will hit the roof. She’ll snap that Nelle is a piece of work and rant about her enemy’s continued scheming.

Nelle will undoubtedly be trying to manipulate her way to freedom. Could she also offer a cryptic clue or two about Jonah? Regardless, General Hospital spoilers say Brad (Parry Shen) will be on edge. His guilt will rev up in Monday’s new GH episode, September 10 so expect plenty of doubt and fear.

In the Corinthos’ home, Sonny (Maurice Benard) and Jason (Steve Burton) will discuss what’s at stake. Jason will wonder how it’ll tie back to Sonny if Mike (Max Gail) left the gun with the body. Sonny will insist that it could be what takes him down for good. If there’s any lingering DNA evidence, Sonny’s world could crumble.

Other General Hospital spoilers say Kristina (Lexi Ainsworth) will make a startling discovery. Julian’s (William deVry) newest bartender will spot Mike and wonder what’s going on. A panicked Mike will declare that Kristina’s not supposed to be there. He messed with the gas line, so extreme danger’s brewing.

Julian will suddenly smell the gas leak, which will prompt an evacuation. After Kristina witnesses Mike dropping a wrench, she’ll get the picture and try to prevent disaster. General Hospital spoilers say Kristina will rush back and try to fix the problem herself.

This building’s set to explode later this week, so that should bring some nail-biting moments for Kristina’s family. We’ll keep you posted as other GH details emerge. Stay tuned to the ABC soap and don’t forget to check CDL often for the latest General Hospital spoilers, updates and news.