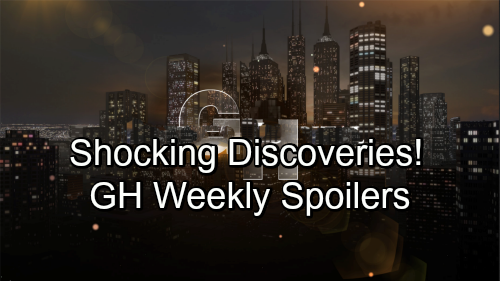 General Hospital (GH) spoilers for the week of September 10-14 tease that some interesting twists are on the way. For starters, Maxie (Kirsten Storms) will offer a warning. Thanks to a box from Madeline’s (Donna Mills) attorneys, Nina (Michelle Stafford) might get some hints about her daughter. That’d certainly be a reason for Maxie to warn Nina. She may not want Nina to get her hopes up.

Over with Valentin (James Patrick Stuart), he’ll get some news from Curtis (Donnell Turner). General Hospital spoilers say Curtis will pass along some info from Carter Buckley, the adoption lawyer Madeline used. It won’t be enough to crack the case, but they should have enough to keep this storyline moving along.

Elsewhere, Michael (Chad Duell) will continue to suffer. It appears an incident could bring a grim reminder of what he’s lost. Carly (Laura Wright) will be furious that same day, so she may go into protective mama bear mode. She may lash out at the person who causes more pain. Regardless, Michael can always lean on Carly if things get too dark.

Unfortunately, that won’t be the only Corinthos mayhem this week. GH spoilers say Mike will get rattled and have another meltdown. Sonny (Maurice Benard) will do his best to help his pop, but he’ll face additional problems later. His secrets will bring confrontations in the coming episodes.

Across town, Drew (Billy Miller) and Sam (Kelly Monaco) will spend a little time reconnecting. These two aren’t getting back together – at least not anytime soon. Still, it’ll be a good opportunity for “Dream” fans to tune in and get their fix. Chase (Josh Swickard) will also discover something stunning. Will it involve Cassandra (Jessica Tuck) or perhaps the father he shares with Finn (Michael Easton)?

Startling developments are looming in both of those stories, so keep watching for more drama. In the meantime, Cameron (William Lipton) will continue to be a troublesome teen. He’ll get on Liz’s (Rebecca Herbst) last nerve and possibly cause some self-doubt for Franco (Roger Howarth).

Other General Hospital spoilers Margaux (Elizabeth Hendrickson) will let her guard down. It could be dangerous since she’s hiding some shockers. Nevertheless, Margaux will feel comfortable enough to share details with Drew. Of course, she’ll undoubtedly leave him out of the loop on the flash drive. That dirty little secret will have to come out later!

Finally, Monica (Leslie Charleson) good intentions could lead to disaster. Will this involve more fallout for Griffin (Matt Cohen) or another round of sorrow for Michael? Could a different Port Charles resident be affected instead? We’ll give you updates as other GH details emerge. Stay tuned to the ABC soap and don’t forget to check CDL often for the latest General Hospital spoilers, updates and news.