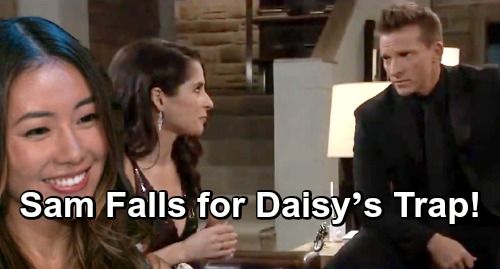 From the get-go, it seemed like Daisy was targeting Kristina specifically. She should be glad that all her recruiting has paid off. Kristina’s slowly being brainwashed into DOD’s way of thinking.

She isn’t buying into anything too terrible just yet, but that could change in the near future. This cult will undoubtedly push Kristina to keep her family at a distance. They’ll be viewed as threats that could pull Kristina out of this mess, but there could be another reason for distance as well.

General Hospital spoilers say Sam McCall (Kelly Monaco) will get her feelings hurt. She’ll develop some fears about Kristina on January 7 and get pushed away on January 8. Sam won’t like being left out of her sister’s life, so she may resolve to fix that.

Perhaps this is exactly what the cult has in mind. Daisy is obviously connected to the Galena newspaper drama, so it seems she fits in the storyline about Sam’s past. Targeting Kristina may just be a way to get to Sam. Either Daisy or someone she works for must have a vendetta.

Of course, Alexis (Nancy Lee Grahn) will get pulled into all this as well. She recently implied that Kristina might’ve given Cameron Webber (William Lipton) the weed idea, which enraged Kristina. She’s tired of her mom always thinking she’s a screwup.

General Hospital spoilers say Alexis will do her best to make amends, but she’ll run into some trouble. Kristina should shut her out as well, so this family’s concerns will intensify. Alexis’ worries could motivate Sam to act sooner rather than later. Neither one of them will want to see Kristina land on a dark path.

Sam may think she could use a distraction from all her email problems anyway. Little does she know these two GH plots are connected! Sam may be lured into a world of surprises thanks to Kristina’s gullibility. Will Sam find herself in over her head with this mysterious threat from her past?

Jason Morgan (Steve Burton) will help Sam investigate and hopefully put an end to her nightmare down the road. For now, Kristina’s cult conundrum lead to danger and some shockers Sam never saw coming. We’ll give you updates as other GH details emerge. Stay tuned to the ABC soap and don’t forget to check CDL often for the latest General Hospital spoilers, updates and news.