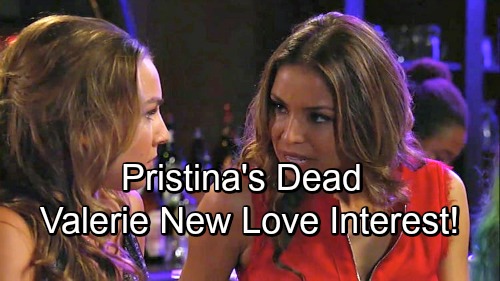 General Hospital (GH) spoilers tease that Kristina (Lexi Ainsworth) will struggle to find her new path. She recently made some serious changes in her life by admitting she was wrong and returning home. Kristina thought she could create a future with Parker (Ashley Jones), but it just wasn’t the right fit.

Now Kristina’s wondering what’s next. She’s content to work at Charlie’s Pub while she figures that out. That’ll give Kristina a chance to cross paths with both new faces and familiar ones. She already bumped into Valerie (Brytni Sarpy), who sat down at the bar and took time to catch up with her.

Of course, many GH fans are curious where this is headed. Valerie once planted a steamy kiss on Kristina to make Parker jealous. Plenty of viewers piped up about the chemistry they saw. It’s possible Valerie would be open to the idea of dating a woman. Kristina could at least develop feelings on her end express some interest.

Parker and Kristina were a bit “meh” for some General Hospital watchers, but Kristina and Valerie could have some potential. It seemed like GH wanted them to sparkle together during their last scene, so this could kick off a new storyline. Since Valerie is set to become a detective soon, she could even get pulled into the cover-up drama.

Kristina helped Mike (Max Gail) and Sonny (Maurice Benard) by hiding the truth about the explosion. It’d be interesting if Valerie found out and was sworn to secrecy. She’d be putting a lot on the line as a brand-new detective. Valerie wouldn’t want to put her career in jeopardy, but she wouldn’t want to betray Kristina either.

As a bonus, this could even become a love triangle. Chase (Josh Swickard) needs a partner at the PCPD, so Valerie will likely fill Dante’s (Dominic Zamprogna) spot. Will Valerie and Chase mix business with pleasure? If so, maybe that could be a reason for Kristina to make a move. Jealousy can catch soap characters off guard and lead to some surprises.