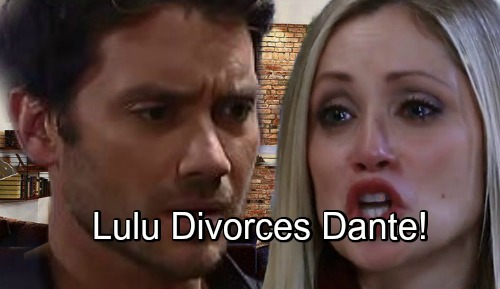 General Hospital (GH) spoilers tease that Lulu (Emme Rylan) will remain in a frustrating situation. Dante’s (Dominic Zamprogna) busy on a mission somewhere, but they’re barely in touch and Lulu doesn’t have anyone to come home to. As if that wasn’t bad enough, they fight whenever they have a chance to talk. Their phone conversations mostly involve Dante disapproving of Lulu’s career path.

Of course, Lulu’s getting quite chummy with Peter (Wes Ramsey) and that’s also a concern. It’s pretty clear that Maxie’s (Kirsten Storms) the one Peter wants, but Dante’s not around to see that. As a result, this could continue to strain their marriage.

On November 7, General Hospital spoilers say Lulu will be forced to steer clear of someone. Could it be Peter? She obviously can’t avoid him at the office, but she may decide to keep things strictly professional. However, that may not be a decision Lulu comes to on her own. Dante may get even more controlling and insist on it.

GH had to write Dante out due to Zamprogna’s departure, so their options are limited. They could recast, but the show doesn’t seem too interested in doing that right now. Perhaps it’s wise since Zamprogna might return one day. You never know! Still, it’s not fair to leave Lulu hanging. She can ride this wave of marital conflict for a while, but sooner or later changes will have to be made.

General Hospital spoilers say Dante’s character will be trashed even further. If they want to move Lulu toward single status, there’s just no other way. It won’t happen overnight, but Lulu eventually won’t be able to take it anymore. Viewers can most likely expect a divorce down the road, so that’ll be a tough blow for Lulu. It won’t be a choice she makes lightly, but something’s bound to be the last straw.

That’ll open the door for new love – if it’s not already open by then! There’s a chance we’ll see an affair before the inevitable “Lante” split. General Hospital spoilers say Chase (Josh Swickard) and Lulu’s friendship will become quite important. GH has romantic plans for him as well, so Chase and Lulu may not be able to resist temptation.

Are you eager to see Lulu put Dante behind her? Would you rather see a recast or some other solution? We’ll give you updates as other GH news comes in. Stay tuned to the ABC soap and don’t forget to check CDL often for the latest General Hospital spoilers, updates and news.