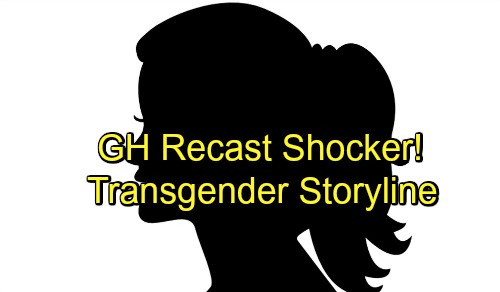 General Hospital (GH) spoilers tease that some leaked casting sides point to a stunning new storyline. The ABC soap has been on a mission to cast the role of “Terry.” This could easily be a fake name to throw fans off the trail. Many viewers are already wondering if this could be a Lucky recast.

The show sometimes picks phony names that resemble the real ones. Some other casting sides recently featured “Jacqueline,” who preferred to go by “Jackie.” Her intimidating boyfriend was “Franky” and based on the mental institution story hints, it’s easy to see that Carly (Laura Wright) and Sonny (Maurice Benard) were the characters involved.

That shows you how these casting sides tend to work. They offer the general idea of the story and characters, but GH alters a few details – like “Franky” the boyfriend standing in for Sonny the husband. “Lucky” is pretty close to “Terry,” so that’s an option to consider in this case.

In the new casting sides, “Terry” is an old friend and ex of another character in the scene. However, there’s a huge twist that could really shake up the soap world. The sides show “Terry” chatting with “Kathleen” at the kitchen table. They laugh over fond memories until “Ben” comes in and is taken aback to see “Kathleen’s” former flame.

Here’s where things get interesting. “Ben” isn’t stunned because “Terry’s” there. He fully expected “Kathleen’s” ex to be in town. “Ben’s” shock stems from the fact that “Terry” is no longer a man! “Terry” gives a brief explanation for her gender transition and they all toast to surprises with wine.

Now that we’ve gone through the details, let’s consider what all this might mean. Based on the dialogue and a few story clues, Liz (Rebecca Herbst) and Franco (Roger Howarth) seem to be the couple in the scene. With that in mind, Lucky would make the most sense as a young love who returns as a woman. He’s been out of the picture for a while, so maybe he became a female during that time.

Of course, this news would be quite controversial. Soap fans usually don’t like to see big changes with legacy characters, but General Hospital might decide to go for it anyway. If they find the right person for the part, it might be an intriguing storyline.

We should reiterate that these are early leaks, so nothing’s set in stone yet. It’s possible that “Terry” (or whatever her name turns out to be) is connected to another set of characters. Even if this character was involved with Liz, that doesn’t mean Lucky is the one.

Nevertheless, a transgender Lucky could happen. General Hospital spoilers say some startling drama’s in the works, so don’t rule out this possibility. In any case, even if the ‘new’ character isn’t transgender Lucky, there appears no doubt that the character is transgender. We’ll give you updates as other GH details emerge. Stay tuned to the ABC soap and don’t forget to check CDL often for the latest General Hospital spoilers, updates and news.