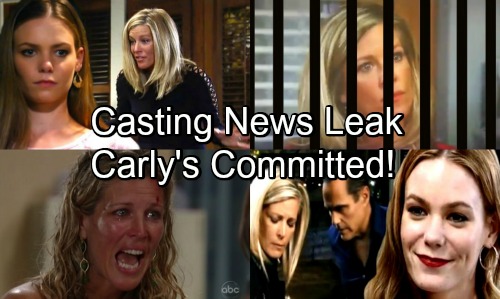 General Hospital (GH) spoilers tease that Carly’s (Laura Wright) mental health will take hit after hit. Nelle’s (Chloe Lanier) hoping to drive Carly off the deep end with her latest scheme. If she can’t do that, she at least wants Carly to look nuts to her loved ones. Either option would work out fine for Nelle. She just needs Carly out of the picture and far, far away from her baby.

GH fans can expect Nelle to rev up her sneakiness. It looks like her baby shower will bring her one step closer to her goal. After Carly loses it over the party stunt, Nelle will be quite pleased. She’ll hope it’s just a matter of time until Carly finds herself committed!

Thanks to some leaked casting sides, we know Nelle’s plot will pay off. General Hospital is casting a couple staff members for a mental institution called Belmont. Unless the names change before the scenes hit the screen, we’ll see Louise and Rupert as some workers there.

As for the other names involved, they’ve been altered a bit to protect the storyline. Of course, they’re pretty easy to figure out. The scenes ahead revolve around “Jacqueline,” who prefers to go by “Jackie.” Since Caroline goes by Carly, we can definitely assume she’s the patient here.

It looks like Louise, the head nurse, will push Carly’s buttons. She’ll insist on calling Carly by her legal name and ramble about group singalongs. Louise will want Carly to participate in some activities, but Carly will hope she won’t be around long enough to become a regular.

GH spoilers say Louise will be impressed with Carly’s positive outlook, but she’ll warn her about following the rules. It sounds like Louise is caring deep down, but she can be tough when pressed. Carly will have to follow orders if she wants to stay on Louise’s good side.

Unfortunately, Carly will become agitated at some point during her Belmont stint. She’ll get into a struggle with Rupert, the staff member tasked with sedating her. A drugged Carly will eventually collapse on the bed, so some heartbreaking moments are in the works.

The leaked info also involves “Franky,” a wealthy and powerful boyfriend. Naturally, that has to be Sonny the mob boss husband. He’ll bribe Rupert with a money clip full of bills to make sure Carly’s treated right. Sonny won’t want his love to endure any more pain than necessary.

General Hospital spoilers say Carly will be even more of a mess once she’s locked up. She’ll feel like she doesn’t belong there, but can she prove it? Will Carly figure out Nelle’s to blame and convince someone of the truth? We’ll give you updates as other GH news comes in. Stick with the ABC soap and don’t forget to check CDL often for the latest General Hospital spoilers, updates and news.