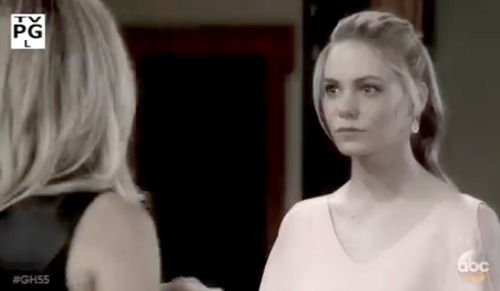 General Hospital (GH) spoilers reveal that Nelle’s (Chloe Lanier) got a risky plan in motion. Of course, Carly (Laura Wright) seems to be working on one of her own. These enemies made fake peace in front of Monica (currently played by Patty McCormack), but they clearly want to take each other down. It looks like both Nelle and Carly think this baby shower will help with that.

However, Nelle’s scheme is obviously the more sinister of the two. Whatever Carly tries to pull, Nelle will just use it against her. General Hospital spoilers say Carly’s walking straight into a trap! Ava (Maura West) insisted she wanted no part of this mess, but Nelle whipped out the results pic. Since Ava can’t afford to make another mistake with Griffin (Matt Cohen), she’ll have to pitch in with Nelle’s plot.

Fortunately, Nelle hasn’t asked for anything major just yet. She simply wants Ava to be at her shower and bring Avery (Ava and Grace Scarola). Later this week, Nelle will add more people to her list of guests. She’ll invite Lucas (Ryan Carnes), Brad (Parry Shen) and anyone else who could add another pair of eyes. Nelle needs as many individuals as possible to witness the Carly chaos.

General Hospital spoilers say the baby shower will start off just fine. Josslyn (Eden McCoy) will be thrilled over all the presents for Nelle’s little one. She’ll approve of the way Carly and Nelle are tolerating each other, too. However, GH fans know it’s all an act. Carly planned to make this a memorable gathering for Nelle, but it seems Carly’s the one everybody will be talking about!

Ava will hand Nelle a gift and urge her to open it. Something tells us she’ll know about the mayhem that’s being unleashed. GH’s weekly promo shows Nelle pretending to be shocked. It appears Nelle will make everyone think this present’s from Carly. She might put a bizarre Morgan (Bryan Craig) reminder inside to make Carly lash out.

Will this involve that blanket Nelle was working on? Is this a replica of Morgan’s baby blanket? If so, Carly might fly into a rage and claim Nelle stole it. That’d certainly make her seem crazy in front of the crowd. Who’s going to believe that Nelle stole Morgan’s blanket, wrapped it up and gave it to herself at the shower? Nobody except Carly, Ava and GH viewers!