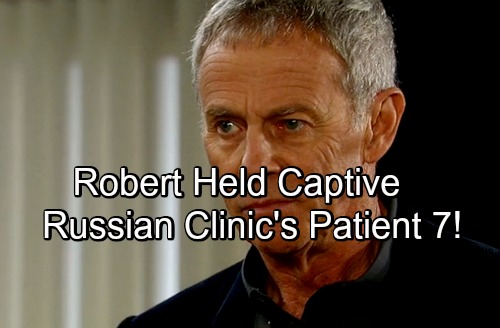 General Hospital (GH) spoilers tease that Robert Scorpio (Tristan Rogers) is headed for trouble. He recently boarded a plane and happily gulped down his drink. When Valentin Cassadine (James Patrick Stuart) appeared, he gloated about it being stronger than Robert was used to. Valentin seemed quite pleased with his plan to take Robert out of the picture.

Whether Robert’s been poisoned or simply drugged, he’s going to be out of it for a while. Whatever Valentin spiked his drink with caused Robert to lose consciousness. Does Valentin intend to permanently eliminate Robert or just stash him somewhere far away from Peter August (Wes Ramsey)?

Valentin’s certainly capable of murder, but GH fans know this probably isn’t the end of the road for Robert. Instead, Valentin may have chosen to hide him. Perhaps the Russian clinic could once again play a role in the plot.

Peter kept Jason Morgan (Steve Burton) there for five years before Ava Jerome (Maura West) arrived for a procedure. Now that Jason and Ava are both back home, Valentin might think the clinic is the perfect hiding spot. He may feel like everyone’s moved on and wouldn’t think to make another trip to Russia.

Valentin has contacts in the clinic who can be trusted. They could keep Robert sedated and captive for as long as Valentin wants. Of course, Valentin really shouldn’t underestimate Robert’s skills and strength. Robert’s a capable WSB agent who’s overcome many obstacles and near-death experiences. If Robert escapes or someone gets tipped off, this whole plan could blow up in Valentin’s face.

General Hospital spoilers say this exciting storyline will come with more shockers. If Robert becomes “Patient Seven,” you can bet he’ll fight just like Jason did. Still, that drug Valentin gave him seemed intense. There’s always a possibility that the situation will turn deadly, especially if the staff keeps pumping Robert full of it.

Robert may hover between life and death thanks to Valentin’s devious move. He might be too weak to flee, so it could be up to someone like Anna (Finola Hughes) or Jason (Steve Burton) to save him. No matter how the rest of Valentin’s scheme plays out, Robert will definitely face some dire circumstances.

Will Robert make it out of this mess alive? Who will save the day? We’ll give you updates as other General Hospital news comes in. Stick with ABC’s GH and don’t forget to check CDL often for the latest General Hospital spoilers, updates and news.