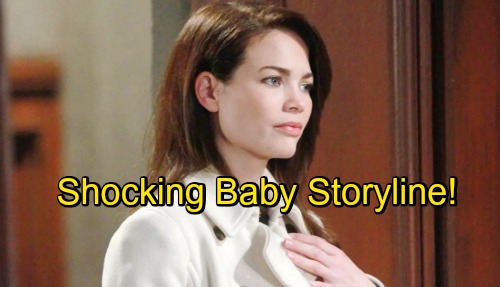 Terry scored a job at GH, so now she’ll be hanging out with Liz more and more. There’s undoubtedly a good reason for that. General Hospital invented this backstory between them out of the blue, so the writers must have a goal in mind. They’re building to something that will tie in both Liz and Terry, so let’s consider what that might be.

Terry’s latest chat with Liz offered some huge clues. Thanks to all of Liz’s issues with Cameron (William Lipton), she was feeling pretty overwhelmed. Terry stepped up to help Liz pinpoint why Cam acted out. She gave a suggestion on how to fix their relationship and praised Liz for being a great mom.

The fact that they talked about motherhood might be significant, especially when you think about what came next. When Liz asked Terry how things were going with her new position, Terry mentioned one case that was particularly challenging. However, she remained positive about the situation and argued that medicine was the business of hope.

Moments later, Kim (Tamara Braun) appeared and wondered if Terry still had time to go over the case they talked about. They had some blood work results to go over. Since Kim is an OB-GYN, that’s another motherly connection. General Hospital viewers noticed Liz looking awfully perplexed. She can tell that something’s up, but she can’t quite put her finger on it.

Liz may not be able to figure this out yet, but perhaps we can. Since there were so many mom hints, maybe Cassandra is hoping to be one. She can’t give birth to a child of her own, so she’ll need someone else to do it for her. Terry may have a surrogate all lined up, which could be why Kim’s helping out with this woman’s blood work. They might be trying to get the whole process started.

Unfortunately, obstacles could soon land in Terry’s path. Nothing is easy on a soap! If the surrogate backs out and Terry has trouble finding another one, she may turn to Liz for comfort. Could Liz step up as Terry’s new surrogate? It’d be an interesting path for GH to take.

Franco (Roger Howarth) and Liz fans have been rooting for them to have a baby together, but she might have a child for Terry instead. Do you think that’s where this story’s headed? General Hospital spoilers say some surprises are looming, so we’ll give you updates as other news comes in. Stick with ABC’s GH and don’t forget to check CDL often for the latest General Hospital spoilers, updates and news.