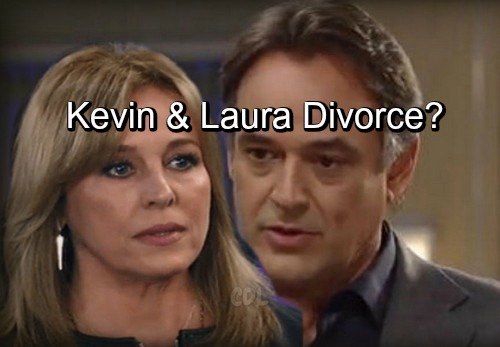 General Hospital (GH) spoilers tease that Kevin (Jon Lindstrom) may be hiding some deep pain. Carly (Laura Wright) was surprised to see him pop up as her Ferncliff doctor. He indicated that he’s picking up some extra work while Laura’s (Genie Francis) out of town. Kevin just wants to stay busy, so he’s undoubtedly missing his lovely wife.

Later, Kevin gave Franco (Roger Howarth) free therapy sessions as a wedding gift. He hopes to see a lot more of him, but this may be about something besides a doctor’s concern. Perhaps it’s another hint that Kevin’s overwhelmed by loneliness. After all, Laura had to rush off shortly after they tied the knot. These two should be enjoy themselves as newlyweds, not pining in different countries.

General Hospital fans know that Genie Francis was fired from the ABC soap. They technically dropped her down to recurring, but we’ve seen no sign of Laura since her exit. GH explained Laura’s departure by writing in an accident for Spencer (Nicholas Bechtel).

Since Spencer broke both his legs, Laura decided her grandson had to come first. She withdrew her candidacy for mayor and headed off to France. Laura wanted to care for Spencer while he recovered, which was supposed to take around six weeks. That was a few months ago, so Kevin’s undoubtedly growing frustrated.

Nicholas Bechtel often shows up for a GH summer stint, which could mean both Laura and Spencer will resurface. It wouldn’t make sense for Spencer to come home without his grandmother. Are all the clues building to Kevin and Laura’s long-awaited reunion? That’s one possibility to consider.

However, there’s a chance General Hospital will skip Spencer’s comeback along with Laura’s. If they make up another excuse to keep Laura away, Kevin may feel like they’ve grow apart. This could be the beginning of the end. Is their marriage on the verge of destruction?