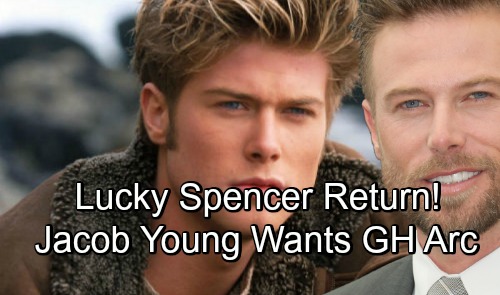 General Hospital (GH) spoilers tease that it’s highly unlikely Jonathan Jackson will reprise Lucky Spencer any time soon, former portrayer Jacob Young just might, at least for an arc! In an August 1 interview with TV Source Magazine, Young is asked since he has exited CBS soap “The Bold and The Beautiful” as a contract player (Rick) if he would consider any other soap work.

Young mentions he’d be willing to do an arc, although not come back on a contract, to reprise Lucky Spencer on GH, and especially if he gets to work with Genie Francis. He knows she’s coming back soon, and expresses he would have fun with his old GH gang.

General Hospital spoilers also warn of some family trouble that might interfere with Elizabeth Webber (Rebecca Herbst) and Franco Baldwin’s (Roger Howarth) wedding. Might that trouble be Lucky Spencer?

Lucky’s return could work as a side-story to whatever GH writers have planned with Laura’s storylines and still have room for Lucky’s involvement in those as well. Lucky and Elizabeth were married twice; he is Aiden Spencer’s (Jason David) natural father, and the only father that Cameron Spencer (William Lipton) has ever known. Lucky also was the one who found little Jake (Hudson West) alive and brought him back from Cassadine Island to Elizabeth.

Lucky hates Franco as much as or possibly even more than Jason Morgan (Steve Burton) does, although Jason is starting to see the changes in Franco and accept them.

Lucky once pushed Franco (or someone he mistook for Franco) off a roof, when Franco (then played by James Franco) had kidnapped baby Aiden and had his mother Betsy (then played by Betsy Franco) take care of him. Lucky tracked down Betsy, who then was going by the name Karen Anderson, and retrieved Aiden from her.

So if Lucky, where ever he is now, gets wind of Franco and Elizabeth’s wedding, he will DEFINITELY have problems with Franco step-fathering his son, as well as Cameron and Jake!

Cameron already disrespects Franco and Lucky’s appearance could make that dysfunction even more dysfunctional. Lucky has had his problems, and has killed, but like Jason, Lucky’s kills were either in defense of others, or as part of his PCPD duties when working as a cop. Franco’s were as a serial killer and Cameron has already reminded Franco of that fact!

So might GH viewers “get Lucky” after all, in the person of Jacob Young’s reprisal of the character? Keep watching GH and checking General Hospital spoilers frequently as the return of Laura Spencer, and possibly her son Lucky, draw near! Come back to CDL for all the General Hospital news and spoilers you need.