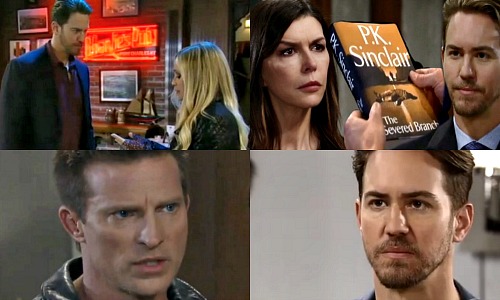 General Hospital (GH) spoilers tease that Anna (Finola Hughes) could put herself in an incredibly dangerous situation. Both Jason (Steve Burton) and Robert (Tristan Rogers) expressed concern over Anna’s latest plan, but she feels like it’s the only way to get to Heinrik. Anna reached out to Lulu (Emme Rylan) via email, so they’ll need to meet up for a chat soon.

On the new GH episode May 8, Lulu will seek guidance from Anna. After she gets the scoop on why Anna believes she’s Heinrik’s mother, Lulu won’t be sure how to proceed. She won’t know how Heinrik will react when she drops this on him. This could bring plenty of peril, so Lulu will just want to be careful.

Anna might argue that Lulu should bring Peter in the loop as soon as possible. Like she told Jason, Anna won’t want Lulu to keep secrets from her boss. Of course, neither one of them realizes that Peter himself is Heinrik! As a result, General Hospital spoilers say this storyline’s about to heat up.

Peter’s in for a shock when Lulu updates him on Anna’s claims. Thanks to that extensive file on Nathan (Ryan Paevey), we know he’s an expert at digging around. Peter may do some research on Anna and try to figure out if she’s telling the truth. He might suspect that this is a trap – and it is.

However, Anna’s admission is also absolutely true. That’s something Peter may not be willing to believe at first, but the facts might add up eventually. Peter may even figure out that Valentin knows more than he’s letting on. He could confront his partner in crime and try to get some answers.

General Hospital spoilers hint that Anna and Peter will put separate plans in motion. Anna will just want to talk and protect her son from Jason’s wrath. Peter, on the other hand, could have a more sinister agenda.

GH fans know that Peter had a rough time growing up. He feels like his mother abandoned him, so it seems he wants to take her down like Faison (Anders Hove). It’s clear that Anna’s scheme is headed for disaster! She’ll make a bold move on May 11 and it could put Peter on the path to vengeance.

Since Robert’s detained at the moment, that could leave Jason to defend her. Will Jason have to take drastic action for a rescue? Will Anna inadvertently make matters worse for her son? We’ll keep you posted as other GH news comes in. Stay tuned to the ABC soap and don’t forget to check CDL often for the latest General Hospital spoilers, updates and news.