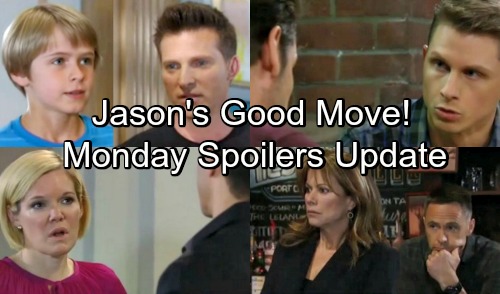 General Hospital (GH) spoilers update for Monday, May 7, tease that the tension will build between Carly (Laura Wright) and Nelle (Chloe Lanier) again. Since Carly can tell Nelle has an agenda, she’ll use smirks and sarcasm to let her know she’s onto her. Carly will suggest that she has a fitting tribute in mind for Nelle, so the pregnant plotter may wonder what’s in store.

Nevertheless, Nelle will choose to focus on her own sneaky plan. GH fans had better believe it’ll bring some shockers! The upcoming baby shower will be an event to remember. In the meantime, Franco (Roger Howarth) will push past his nerves and meet with Steven Blake (Pressly Coker). Steven was also abused by Jim Harvey (Greg Evigan), so he’ll want to hear about the monster’s demise.

General Hospital spoilers say Franco will recap what happened and suggest that he wanted to offer closure. He’ll talk about the healing process, but Steven will lash out at him. It sounds like he won’t agree with Franco’s outlook, so they’ll have to talk through this and see how things work out. Perhaps Steven will actually be able to assist Franco on his journey.

Elsewhere, Olivia (Lisa LoCicero) will come up with a tactic to repair Ned’s (Wally Kurth) image. As mayor, he needs to seem like a strong and capable leader. At the moment, Ned looks a bit incompetent. Some of Port Charles is still in bad shape thanks to the earthquake. There’s not enough help to rebuild, so plenty of citizens are suffering.

Olivia’s suggestion could fix a few minor problems, but it won’t be enough to stop the next crisis. At Charlie’s Pub, Stella (Vernee Watson) will lead the charge against the city. She’ll propose a solution that will shake things up for PC. Alexis (Nancy Lee Grahn) will run with the idea, so a class action lawsuit will be filed soon. This bold move will surely throw Ned for a loop!

Across town, Jake (Hudson West) will get an awkward visit from his father. Jason (Steve Burton) will stop by Liz’s (Rebecca Herbst) house to deliver some birthday wishes. With a little coaching from Mom, it seems Jake will have a pleasant chat with Jason. These two should be on the right track after Monday’s progress.

Over with Ava (Maura West) and Griffin (Matt Cohen), they’ll have a serious discussion. General Hospital spoilers say they’ll try to keep their voices down this time. All the yelling and accusation hurling doesn’t do either of them any good. It appears the conflict will start to die down, so GH viewers may see some heartfelt apologies.

General Hospital has a great episode coming up. We’ll give you updates as other GH news emerges. Stay tuned to the ABC soap and don’t forget to check CDL often for the latest General Hospital spoilers, updates and news.