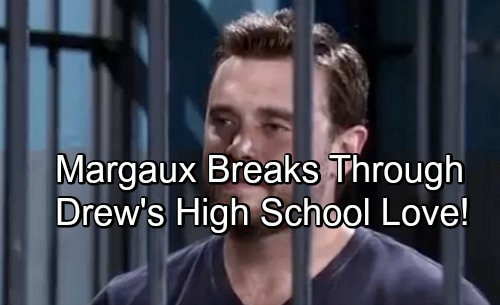 General Hospital (GH) spoilers tease that Margaux’s (Elizabeth Hendrickson) past will slowly unravel. She’s kicking things off as the DA in Carly’s (Laura Wright) case, but there’s much more to this prosecutor than meets the eye. Margaux may be a powerful force in the courtroom, but there’s undoubtedly a tender heart underneath her aggressive exterior.

As with any new GH character, there should be some pain in Margaux’s history. She most likely had her heart broken and perhaps threw herself into her work to cope. Since Margaux’s all about getting justice for victims, she may have even been a victim herself at some point. Any soapy backstory’s bound to have some sorrow and calamity.

However, we should focus on Margaux’s love life and what the show intends to expose. Once Carly’s case wraps up, Margaux will be free to interact with more characters. General Hospital spoilers say Margaux will relate to certain Port Charles residents in surprising ways. She may have some connections that go back many years.

We also know Chase (Josh Swickard) has shocking ties to someone besides Finn (Michael Easton) in PC. That summer bombshell’s in the works. Some fans have suggested that maybe Chase and Margaux dated at one time. That’s a possibility to consider, but it’d make more sense for Margaux and Drew (Billy Miller) to be exes.

Even if Margaux and Chase were together in the past, they’re definitely not what GH has in mind for the future. Hendrickson and her competitors screen-tested with Miller, not Swickard. Margaux could know Drew from his younger days. A leaked script pointed in the direction of these two being high school lovebirds.

Naturally, things could be tricky since Drew looks totally different now. Margaux might run into Drew and not even know he’s her long-lost love! She could also spot Jason (Steve Burton) and have a similar reaction to the one Kim (Tamara Braun) initially had.

Once everything’s sorted out, Margaux could play a crucial role in helping Drew remember. He’s hoping that by wiping Jason’s memories from his brain, he’ll free his mind to recall his own. Drew may struggle without some reminders. Kim can pitch in a bit, but Margaux may spark the real breakthrough Drew needs.

Are you ready to see what’s in store for Margaux? Will she assist Drew by stirring up old feelings and jogging his memory? We’ll give you updates as other General Hospital news comes in. Stay tuned to ABC’s GH and don’t forget to check CDL often for the latest General Hospital spoilers, updates and news.