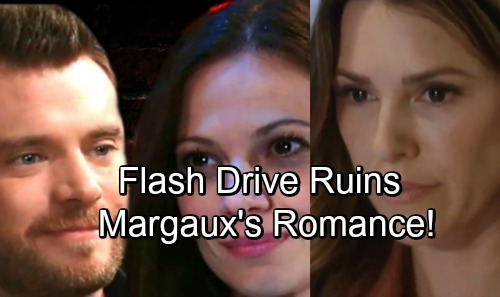 General Hospital (GH) spoilers tease that Drew (Billy Miller) will get some help with his memory recovery. During a chat with Margaux (Elizabeth Hendrickson), Drew mentioned his high school reunion invitation. He admitted that he didn’t actually remember anything before 2014.

Later, Margaux found an envelope with Drew’s name written on it. It was empty, but that became an important piece of the puzzle. Once Margaux heard about the flash drive, she dashed off to check the Metro Court’s lost and found box. Her big discovery could change Drew’s life forever!

There would still be risks with a reversal procedure, but there’d also be a far greater chance of success. Drew will soon have something to replace Jason’s (Steve Burton) memories with, so it’d be worth a shot. That’s especially true if Margaux’s there cheering Drew on. She seems like a risktaker, so she’d surely urge Drew to go for it.

These two hit it off as friends, but love could bloom thanks to all Margaux’s help. That could bring even more GH drama after Drew’s memories come rushing back. If Margaux hands over the flash drive as expected, she’ll be giving Drew an unbelievable gift. It’d mean the world to Drew if he could remember who he really is and how he turned out like this.

Unfortunately, Margaux could also be setting herself up for trouble. General Hospital spoilers hint that some complications are indeed brewing. If Drew recalls his past, that means he’ll remember his feelings for Kim (Tamara Braun). They had an intense romance before Oscar (Garren Stitt) was born. Kim still longs for Drew, so this could spark an intense reconnection.

However, this will probably just be a bump in the road for Drew and Margaux. Kim was with Drew a long time ago, so there’s no guarantee the magic’s still there. Perhaps General Hospital will use this to pull Margaux and Drew closer. There’s some hot chemistry between them, so GH fans are anxious to see where this leads.

Are you hoping to see Marguax and Drew as a couple? We’ll give you updates as other news comes in. Stay tuned to the ABC soap and don’t forget to check CDL often for the latest General Hospital spoilers, updates and news.