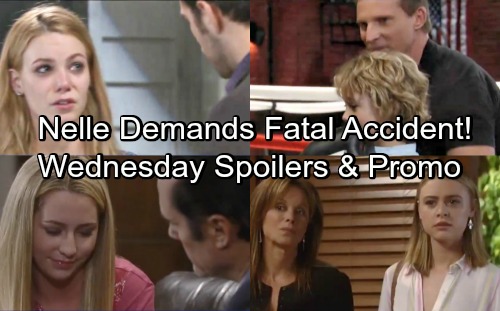 General Hospital (GH) spoilers for Wednesday, July 25, tease that Nelle (Chloe Lanier) will only see one solution to her problem. She’ll spell it out as she continues her emotional chat with Chase (Josh Swickard). Nelle will suggest that Michael (Chad Duell) has to die in some kind of accident. She’ll push Chase to take Michael out of the picture permanently, so he’ll feel like they’ve finally got her.

Once Nelle takes the bait, Chase will text Michael with updates. General Hospital spoilers say Michael will fill Sonny (Maurice Benard) in as well. He’ll insist that the trap’s been set, so it’s time to bring Nelle down. Later, Nelle will compose herself and have a conversation with Josslyn (Eden McCoy). She’ll offer Joss advice after plotting to kill her brother, so this is one messed up situation!

Josslyn will also make some kind of deal with Sonny on Wednesday. They’ll smile as they shake on something, so at least they’ll have a glimmer of happiness. At the boxing gym, Jason (Steve Burton) will enjoy some family time with Sam (Kelly Monaco) and Danny (T.K. Weaver). They’ll teach their son some punching bag techniques and have a little fun.

Of course, Jason will remain worried about Carly (Laura Wright). General Hospital spoilers say Sam will ask if there’s any news from Ferncliff. She’ll hope things aren’t too rough on Carly in there, but Jason won’t be hopeful about his bestie’s predicament. He’ll realize he needs to get Carly out as soon as possible. Within a few GH episodes, Jason will arm himself and take drastic action for Carly’s sake.

Over with Alexis (Nancy Lee Grahn), she’ll stun Kiki (Hayley Erin) with an important meeting. Ava (Maura West), Jordan (Vinessa Antoine), Kim (Tamara Braun) and Olivia (Lisa LoCicero) will all be on hand to help. Since Kiki’s been consumed with worry lately, Alexis may feel like they can help her stop obsessing. Kiki isn’t going to change the outcome of this case by fretting, so she might as well let go.

There’s only one thing that could change the game for Kiki and that’s coming clean about her hookup with Griffin (Matt Cohen). Since Kiki refuses to confess to Alexis, that’ll lead to some unpleasant surprises later. We’ll keep you posted as other GH details emerge. Stay tuned to the ABC soap and don’t often for the latest General Hospital spoilers, updates and news.