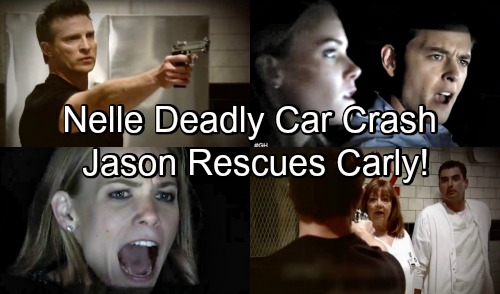 General Hospital (GH) spoilers indicate that Michael and Nelle are facing a deadly car crash while Jason is on a mission to rescue Carly from Ferncliff at gunpoint. A new promo video shows GH fans a sequence of action scenes that promise shocking drama as Summers Sweeps finish up this week, July 23-27 .

Nelle has been plotting to get rid of Michael in one way or another. After finding out his plans to divorce her after their baby is born, Nelle has been racing against time to make sure that he ends up dead before it’s too late for her.

Nelle knows she can’t be left with nothing after Michael betrays her. In the promo, she says in tears to a shocked Chase, “I have to find a way for Michael to die.”

Nelle does as expected, asking Chase to kill Michael after he tells her that he’s willing to do anything for her. Little does she know though that her plan might go up in smoke.

Nelle and Michael have a heated argument in the car, with Michael accusing her of destroying his family. After tense words are exchanged, Nelle screams as Michael swerves desperately off the road. Nelle might have wanted to put Michael six feet under, but it looks like she might be on her way there, too.

Sonny, meanwhile, is growing frustrated with Carly terrible treatment in Ferncliff. Now that Jason has gotten the boot, she’s on her own.

Sonny tells Jason, “She’s stuck in that snake pit with no one to help her.” Carly can also be seen strapped up in a padded room ready to get an injection saying desperately, “I don’t want to do this.”

Jason, finally taking matters into his own hands, shows up at Ferncliff with a gun and aims it at a terrified Nurse Mary Pat. Seeing how Carly can’t take it anymore, Jason is willing to set her free with a showdown that you won’t want to miss.

In the meantime, don’t forget to check back with CDL for all the latest news, updates and spoilers on General Hospital and all of your favorite daytime television shows right here.