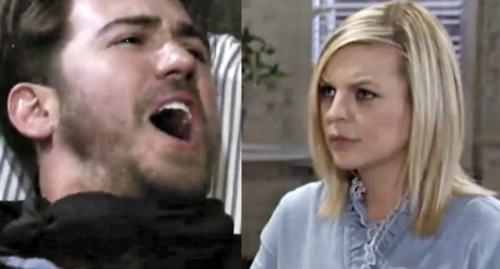 General Hospital (GH) spoilers tease that Maxie (Kirsten Storms) will get some wild news. She assumes Peter’s (Wes Ramsey) still on the run, but the real story’s far more complicated. Peter intended to flee, but he never made it out of the country. Instead, Liesl (Kathleen Gati) scooped him up and turned him into her hostage.

Of course, Nina (Michelle Stafford) became a co-conspirator soon after the kidnapping. None of this will probably go over well with Maxie. GH fans know she was furious when Peter revealed his deception, but she also seemed touched by his apology. Maxie can’t help it if she still feels something for Peter. They were building toward a romance before the Heinrik drama came to light.

Whether that romance gets back on track or not, it’s doubtful Maxie will approve of Liesl and Nina’s actions. Maxie has been lied to enough as it is. She won’t appreciate the fact that Dr. O and Nina were also keeping secrets.

Furthermore, Maxie won’t like that Liesl stooped so low. Torturing Peter like that was really pushing it. Maxie may scold Liesl for choosing a strategy Faison (Anders Hove) might’ve used. She’s fed up with all the violence and cruelty. Maxie would like to see a better world for little James, so she’s tired of ruthless tactics.

Nathan (Ryan Paevey) was a solid guy and he wouldn’t have wanted Peter to endure such agony. Maxie shouldn’t be pleased that Nina let it go on for so long. Once Maxie rips into the kidnapper and her accomplice, she’ll do some soul-searching. Will Maxie finally be ready to forgive Peter?

Peter may be pulled in another romantic direction soon. At least that’s what General Hospital buzz suggests! If that’s the case, Maxie may simply offer forgiveness for her own peace of mind. There’s a chance they could be friends again one day, but letting go her anger could be a nice start.