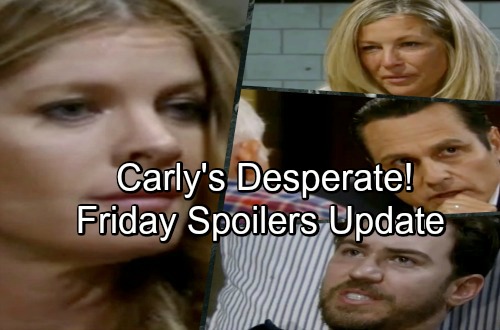 General Hospital (GH) spoilers update for Friday, June 15, tease that Oscar (Garren Stitt) will tell his troubles to Drew (Billy Miller). He’ll confess that he doesn’t have a big problem with Julian (William deVry). Oscar’s only real complaint is that Kim (Tamara Braun) isn’t dating Drew instead. Now that he’s got his dad in his life, Oscar would love to have a united family as well.

Drew will understand why Oscar would feel that way. He’ll be sorry that things haven’t panned out exactly like his son wants, but he’ll offer plenty of reassurance. Drew has a great time with Oscar and Kim. He fully intends to keep hanging out with them on a regular basis. Drew may point out that they’re all getting closer and that’s what matters.

Of course, there’s a good chance Drew and Kim will get together eventually. GH appears to be pushing them in that direction, so Oscar should keep hope alive. In the meantime, Kim will tell Julian to just stick with her. He’ll express reservations about their latest adventure, but Kim’s apparently a camping pro. She’ll feel confident that their trip will go smoothly.

However, Peter’s (Wes Ramsey) being held hostage in a secluded area. Could Julian and Kim just happen to camp nearby? Will they hear Peter’s screams and come to his rescue? General Hospital fans will have to wait and see, but this could be the ideal discovery setup.

Until help arrives, Peter will remain trapped with Liesl (Kathleen Gati). His ordeal has been brutal, so he’ll welcome Nina’s (Michelle Stafford) return. Peter will look exhausted and desperate as he softly begs for Nina’s help. He’ll insist that she can save his life if she just has a little compassion.

While Nina considers her next move, Kevin (Jon Lindstrom) will also be tasked with helping someone. Carly (Laura Wright) is incredibly distraught at Ferncliff. It’s only day one and she’s already starting to lose it in there!

Carly will wonder if Kevin can get her out, but that’s not something that can happen overnight. That’s especially true when an exciting plot still has to play out. Kevin might promise to put a strategy in motion, but Carly will have to suffer for now.

Other General Hospital spoilers say Mike (Max Gail) will have to put his thinking cap on. Sonny (Maurice Benard) will hope his dad can focus and remember what he’s blabbed about. This is certainly a critical situation. Sonny will ask if Mike’s been telling anyone about what he did for Scully (Robert Miano). He’ll try to determine if Mike’s squealed about Croton and the body that he buried.

Finally, Anna (Finola Hughes) will get another pep talk from Finn (Michael Easton). She’s still dealing with a lot, but he’ll know exactly how to cheer her up. Are you glad Anna and Finn found their way back to each other? We’ll give you updates as other GH news comes in. Stick with the ABC soap and don’t forget to check CDL often for the latest General Hospital spoilers, updates and news.