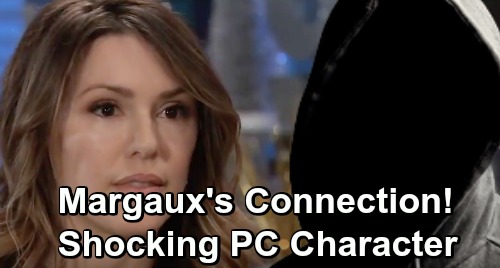 General Hospital (GH) spoilers tease that Margaux Dawson (Elizabeth Hendrickson) may be keeping some secrets. She’s always been a bit on the mysterious side, so it makes sense that she hasn’t shared everything just yet. It looks like Margaux may be hiding something that’ll draw her into another big storyline.

New characters tend to be given a connection on canvas. Margaux got one when GH revealed Sonny Corinthos (Maurice Benard) as her father’s killer. However, it turns out that’s not Margaux’s only link to Port Charles. General Hospital spoilers say another startling connection will be exposed and it’s sure to bring some shockers.

Who could be tied to Margaux? The options are kind of limited since Margaux’s already interacted with a good chunk of the show’s cast. Of course, there must be an explanation and it’s our job to figure this out. We can think of at least a few excellent options for this stunning Margaux link.

For starters, let’s consider Kim Nero (Tamara Braun). The first time she ran into Margaux, she couldn’t shake the feeling that she knew her from somewhere. Kim could never put her finger on it, but there was definitely some familiarity on her end.

Perhaps Kim’s memory was just a little fuzzy. Could something finally come rushing back? Kim obviously doesn’t have a strong connection to Margaux or else she would’ve remembered her immediately. Her link to Margaux could actually be through someone else.

Drew Cain (Billy Miller) can’t remember his past and Margaux kept the flash drive from him for quite some time. Was that really just about leverage? Could Margaux have initially been hesitant to let Drew recall something? They talked about Drew’s high school reunion at one point. There was also a leaked GH audition script that dropped hints about Drew’s high school sweetheart.

Margaux’s got an excellent poker face, so she could’ve kept an old romance with Drew a secret. She may not want to drag that up for whatever reason. Since Drew expressed no interest in having the procedure done, Margaux might’ve thought it was safe to hand the flash drive over. Either that or she actually decided to do the right thing – even if it meant Drew took the risk and suddenly remembered her.

As for the Kim link, what if Drew once shared a picture he took with Margaux or showed off a yearbook? That could explain that vague feeling of familiarity. Since the storyline about Drew’s past is heating up, it’s reasonable to think General Hospital might throw in a Margaux twist.

Then again, we don’t want to box ourselves in. It’s also possible Margaux will somehow connect to Sam McCall’s (Kelly Monaco) history since her story’s revving up, too. Did she know one of Sam’s marks? There could even be a Daisy (Kelsey Wang) link, especially if Margaux had some wild cult days in her younger years.

Regardless, Margaux’s got some hidden treasures left in her backstory. General Hospital spoilers say her second link on canvas will be revealed in a surprising way, so stay tuned. We’ll give you updates as other GH news comes in. Stick with the ABC soap and don’t forget to check CDL often for the latest General Hospital spoilers, updates and news.