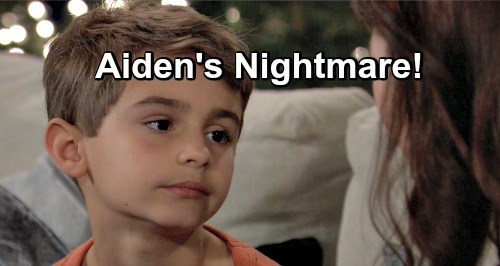 General Hospital (GH) spoilers tease that Elizabeth Webber (Rebecca Herbst) will remain concerned about her son. Aiden Webber (Jason David) went through quite an ordeal thanks to Charlotte Cassadine’s (Scarlett Fernandez) bullying, but she’s not the only little terror in his class. Charlotte has warned that everyone thinks Aiden’s weird, so other bullies may step up soon.

It looks like Liz will fill Willow Tait (Katelyn MacMullen) in on the situation. Willow wasn’t allowed to reveal the bully’s name before, but Liz may admit they know it was Aiden’s cousin. On January 4, General Hospital spoilers say Liz will call Willow and set up another parent-teacher conference. She’ll want to discuss the new information and get updates on how this will be handled moving forward.

Liz may view this as a preemptive strike against anyone who might target Aiden. She’ll want to keep Willow in the loop on the lingering threat. Liz hates to see the poor little fella feeling so down. Despite Cameron Webber’s (William Lipton) best efforts to help, Aiden will still struggle with self-esteem issues.

Once school’s back in session, Willow may face some struggles of her own. She may trade one ringleader for another and grow even more concerned about Aiden. For a sweet kid that age, it’d be devastating to get one nightmare off your back only to have it replaced with another one. How much more can Aiden take?

General Hospital spoilers say Aiden’s problems will bring some difficult moments for his family. Cameron’s got a good heart and it’s especially tender when it comes to his brothers. If all this results in a suicide attempt or Aiden faces violence from his classmates, it should leave Cameron in a dark place.

Who will Cam turn to when things get tough? Josslyn Jacks (Eden McCoy) seems like he only answer. They grew closer than ever during Joss’ fake boyfriend plot and it’s been hard to turn off that connection. Cameron has put some distance between them, but that plan may not last long. He may crumble over Aiden’s troubles and have to lean on Josslyn for support.

Cameron may feel like he hasn’t done enough to help his little bro. It’s easy to imagine Josslyn reassuring Cameron and being there for him in his time of need. This could be what GH uses to pull Joss in Cam’s direction again. General Hospital fans know it’s bound to happen, so using family drama like this would be a good way to go.

Could this lead to some cheating behind Oscar Nero’s (Garren Stitt) back? Josslyn and Cameron have an intense bond, so a betrayal is certainly an option. We’ll keep you posted as other GH news comes in. Stay tuned to the ABC soap and don’t forget to check CDL often for the latest General Hospital spoilers, updates and news.