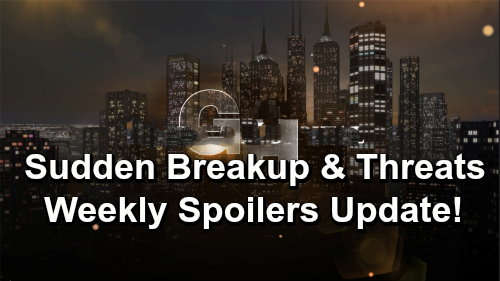 General Hospital (GH) spoilers for the week of December 31-January 4 tease that some surprises are in store. Of course, one thing that shouldn’t come as a surprise is a holiday schedule adjustment. We’ve got New Year’s Eve and New Year’s Day details so you won’t be caught off guard.

On Monday, December 31, General Hospital will air a repeat of a classic episode. Tuesday’s episode will be preempted for sports coverage, so Wednesday’s when the show will get back down to business. GH fans can expect a brand-new episode on January 2.

General Hospital spoilers say Lulu Falconeri (Emme Rylan) will give Ava Jerome (Maura West) something to think about. Their chat will spark action for Ava and possibly Lulu as well. A big event is coming up at Charlie’s Pub and Lulu will be the one who puts it all together.

Julian Jerome (William deVry) should appreciate the extra customers, but he’ll be more concerned about his romance. While Julian mulls over a kiss between Kim Nero (Tamara Braun) and Drew Cain (Billy Miller), Drew will give Kim some advice.

He’ll think she needs to focus on the good thing she’s got going with Julian, so that’s what she’ll try to do. Too bad Julian will dump her!

Elsewhere, the cops will investigate Ryan Chamberlain’s (Jon Lindstrom) latest murder. Of course, they won’t know Ryan’s behind it. Laura Collins (Genie Francis) hasn’t figured out Ryan’s charade yet either, so she’ll be moved when she sees a glimmer of kindness from “Kevin Collins” (Jon Lindstrom). It’ll most likely be Ryan’s way of settling Laura down and throwing her off his trail.

Across town, Elizabeth Webber (Rebecca Herbst) will reach out to Willow Tait (Katelyn MacMullen). She’ll want to touch base about Aiden Webber (Jason David) and the bullying issue.

Liz will hope her sweet boy doesn’t have to deal with any more drama, but there’s indeed additional trouble ahead for Aiden. Charlotte Cassadine (Scarlett Fernandez) is backing off, but another bully could take her place.

Other General Hospital spoilers say Curtis Ashford (Donnell Turner) will be a busy man. Jordan Ashford (Briana Nicole Henry) will need Curtis’ assistance, so this may involve snooping as part of the murder investigations. Curtis will also serve as a sounding board for overwhelmed Drew.

Over with Maxie West (Kirsten Storms), she’ll take James West out to breakfast and most likely run into Peter August (Wes Ramsey). He always seems to end up where Maxie is! Next, Sam McCall (Kelly Monaco) will be unsettled by another message. You can bet Jason Morgan (Steve Burton) will help Sam sort out the next clue.

Finally, Sonny Corinthos (Maurice Benard) will create a distraction for Mike Corbin (Max Gail). He’ll hope to keep his dad’s mind off Yvonne Godfrey (Janet Hubert) and anything else that could leave him confused. Mike’s mental state is fading fast, but he’ll still appreciate spending some time with Sonny this week.