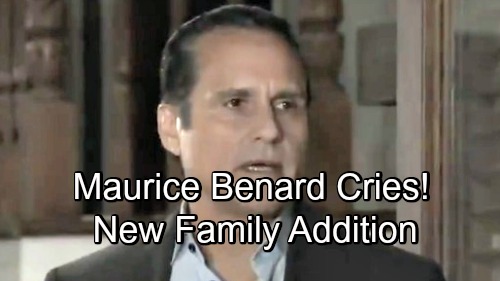 General Hospital (GH) spoilers is pleased to announce that Maurice Benard, who portrays Sonny Corinthos on the ABC soap, has some exciting family news. Maurice recently shared on Instagram that his daughter, Cailey, got engaged!

Maurice posted a video of his future son-in-law, Carlos, proposing to Cailey. The proposal took place at Disneyland, in front of a fireplace in one of the castles. The video shows Carlos getting on one knee and sweetly asking Cailey to be his wife…and she happily accepted as onlookers cheered and clapped.

You can tell from the message that Maurice posted along with the video that he’s as happy as can be. He wrote: “I really can’t say a lot because I’m bawling like a baby. I love my daughter and I love her husband to be. Carlos made us all very happy. @disneyland”

Maurice’s many Instagram followers responded with enthusiasm to the message. He’s received scores of congratulations and well-wishes from fans. Eden McCoy, who portrays Josslyn Jacks on GH, replied with “huge congrats!!!” on Twitter, where Maurice’s message was re-posted.

Maurice and his wife Paula have four children: Cailey, Heather, Cassidy, and Joshua. He frequently posts news and updates about his family. Hopefully, we’ll see some more updates as the wedding nears and plans are made.

Maurice Benard recently celebrated his 25th anniversary with General Hospital, and he will be appearing in the upcoming Lifetime movie “The Victoria Gotti Story” as mob boss John Gotti.

Congratulations to Maurice, and to Cailey and Carlos! Stay tuned to the ABC soap and don’t forget to check CDL often for the latest General Hospital spoilers, updates, and news.