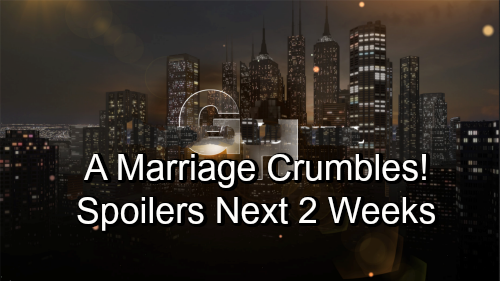 General Hospital (GH) spoilers for the next two weeks tease that several Port Charles residents will face drama. During the week of October 8-12, Kim (Tamara Braun) will want to do something drastic. She’s watching Oscar (Garren Stitt) lose all hope, so she won’t want to him to throw away what’s left of his life.

Kim will do whatever it takes to get Oscar on board with the clinical trial. She’ll be determined to buy him more time if possible. Meanwhile, Oscar will realize he needs to make some changes. Perhaps this involves his plan to push Josslyn (Eden McCoy) away. Instead of telling Joss the truth, Oscar decided to change his social media status to single and block her from viewing anything.

Oscar’s hoping that if Josslyn hates him, it’ll make it easier for her to say goodbye. Josslyn will indeed battle anger, but she’ll mostly just be hurt. Oscar might start flirting with other girls to really get his point across. He’ll feel like he’s protecting Josslyn, but he’s clearly making all the wrong choices.

Over with Finn (Michael Easton), he’ll face a GH shocker. Will his father’s test results spell trouble? Finn didn’t expect to see anything too terrible, but an unpleasant surprise could be headed his way. Gregory (James Read) will undoubtedly get updates once Finn knows what he’s dealing with.

Elsewhere, Maxie (Kirsten Storms) will have to do some pretending. She’ll find out about a surprise a bit too soon, so she’ll have to fake it when the time comes. It appears Peter (Wes Ramsey) may be behind this sweet gesture. He may be bummed that his plans were spoiled, but he’ll eventually have another shot at catching Maxie off guard.

Other General Hospital spoilers say Cameron (William Lipton) won’t be able to stop himself. Does that mean he’ll tell Josslyn about Oscar’s condition? Could it involve making his move with Joss instead? Either way, this should make Oscar’s suffering even worse. He’s crumbling under the weight of his condition and the stress it’s brought.

Back with Kim, she’ll turn to Bobbie (Jacklyn Zeman) for comfort and advice. Once Kim gets some sweet words of wisdom, she should feel a little better. As for Oscar, he’ll feel ambushed soon enough. Will his loved ones come together to force him back on the right path?

It sounds like the next two weeks will bring some great General Hospital scenes. We’ll keep you posted as other GH news comes in. Stay tuned to the ABC soap and don’t forget to check CDL often for the latest General Hospital spoilers, updates and news.