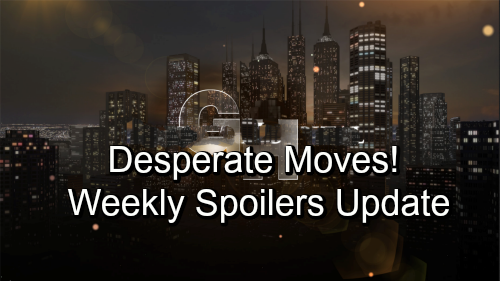 General Hospital (GH) spoilers for the week of October 8-12 tease that some conflict’s ahead in Port Charles. First, Ava (Maura West) and Kiki (Hayley Erin) will face off again. GH fans know Kiki’s fed up with her hypocrite of a mom. Ava’s just as furious over her daughter’s betrayal, so they’re in a terrible place right now. Their next showdown will serve as more proof of that.

Will Kiki blab about her new relationship with Griffin (Matt Cohen) during this fight? She may take the opportunity to gloat or simply decide it’s not worth the effort. Either way, Kiki and Ava won’t be making any positive progress. Over with Oscar (Garren Stitt), he’ll remain at odds with Drew (Billy Miller) and Kim (Tamara Braun). His path of destruction will definitely continue in the week ahead.

Since Oscar has give up hope, Kim will feel like she has to take the lead here. She’ll do something drastic, so this may involve Oscar’s treatment plan. The clinical trial is a longshot and comes with plenty of risks, but Kim will still want Oscar to try it. He’s a minor, so Kim could force him into it. She’d do anything to keep her son alive and give him a chance at a longer life.

Liz (Rebecca Herbst) will end up consoling Kim a little later. She’ll also face a family mess of her own thanks to an incident at Aiden’s (Jason David) school. Meanwhile, Lulu (Emme Rylan) will be there for Nina (Michelle Stafford). It looks like Sasha (Sofia Mattsson) will reject Nina’s attempts to meet her, so that’s not the outcome this mom was hoping for.

Elsewhere, Sam (Kelly Monaco) wrestle with her future. After sharing some close moments with Jason (Steve Burton), Sam will open up to Alexis (Nancy Lee Grahn). They’ll grab lunch together and try to make sense of Sam’s complicated love life.

Back with Nina, desperation will drive her to do something she regrets. Nina might reach out to Sasha again and make matters worse. It’s not a good idea to push too hard right now. Sasha clearly needs time to process everything, but General Hospital spoilers say Nina will struggle to back off.

Valentin (James Patrick Stuart) will get a warning, so Curtis (Donnell Turner) might suggest that he should stay out of this. He’ll realize Valentin’s first instinct will be to intervene, but this is a mother-daughter matter. Too bad that probably won’t stop Valentin from butting in anyway!

Finally, Margaux (Elizabeth Hendrickson) will hope she can use the flash drive to her advantage. Drew could face an offer he never saw coming soon enough! We’ll give you updates as other General Hospital news emerges. Stick with the ABC’s GH and don’t forget to check CDL often for the latest General Hospital spoilers, updates and news.