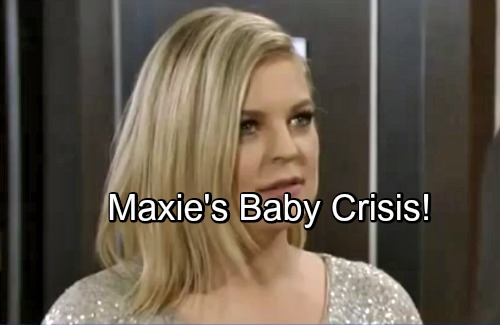 General Hospital (GH) spoilers tease that some baby drama should be on the way for Maxie (Kristen Storms) soon. Nelle’s (Chloe Lanier) had her crisis and now it’s Maxie’s turn. GH viewers know there’s bound to be some chaos brewing, so let’s consider how this might play out.

As usual, the Nurses Ball will take a dramatic turn. Robert (Tristan Rogers) will come back for a great storyline, so he might give Anna (Finola Hughes) the scoop on Henrik’s new identity. Robert may have learned major secrets during his ordeal with Valentin (James Patrick Stuart). Once he escapes and starts spilling things, it could really rev up the pressure.

General Hospital spoilers have been hinting at a big reveal, so maybe that’ll be it. GH could fill Anna in and leave everyone else in the dark for now. However, the Nurses Ball won’t conclude without a bit of danger. There could be a threat on someone’s life or some freak accident that brings pandemonium.

Whatever the case, it could give Maxie a real fright. Will it be enough to send Maxie into labor? Will she have to wait for an ambulance as the Nurses Ball wraps up? On May 21, General Hospital spoilers say Peter will stay right by Maxie’s side. He’ll want to provide plenty of comfort and support.

GH fans can also expect Sam to offer assistance next week, May 21-25. Perhaps Peter will remain with Maxie while Sam calls 911. She may even help Peter deliver the baby if paramedics don’t arrive in time. It’s May sweeps, so anything can happen on the ABC soap!

Later, Maxie will be dismayed. You can bet Peter will once again step up to console her. Will Maxie’s baby be in bad shape? Will unexpected complications arise and bring some scary moments? Once Maxie gives birth and makes it to GH, she may worry that her child won’t survive.

Whether Maxie’s baby lives or dies, this nightmare could bring her much closer to Peter. Will their bond break after the Heinrik revelation? Is there a chance their connection can be salvaged? We’ll give you updates as other news comes in. Stick with ABC’s GH and don’t forget to check CDL often for the latest General Hospital spoilers, updates and news.