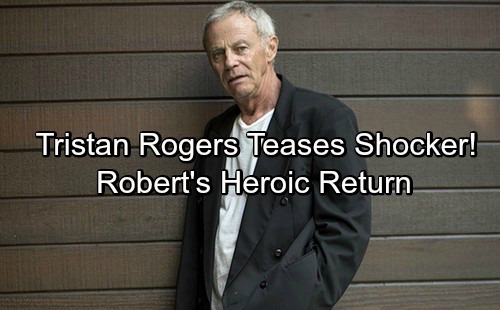 General Hospital (GH) spoilers tease that it’s almost time for the Nurses Ball, so fans are gearing up for all the beautiful gowns and fantastic performances. This year’s bash will even include some mischief from a llama named Dutch. It’s clear that anything can happen at Port Charles’ biggest event!

Lynn Herring (Lucy Coe) recently sent out a tweet to acknowledge the llama situation. She’s thrilled about 2018’s festivities, so she wanted to share that excitement with viewers. “Can’t wait for you to see DUTCH, the Llama, and all his Nurses Ball pals! @GeneralHospital @OfficialGHFC #NursesBall18 #LlamaMama.”

However, the hottest General Hospital spoilers came from tweet in the replies. Tristan Rogers (Robert Scorpio) chimed in with some hints about what’s next for his character. GH watchers have obviously been wondering about the Robert situation. People are curious about where Robert is and when he’ll be back, so it’s nice that Rogers could clear things up.

Rogers teased, “Stand by for Roberts appearance at the Nurses Ball. You’ll like it.” To consider where this storyline’s going, we have to look back a bit. Valentin (James Patrick Stuart) and Peter (Wes Ramsey) recently decided Robert was becoming too much of a threat. Peter pushed Valentin to get rid of him and Valentin apparently agreed it was necessary.

Robert was tricked into getting on a plane, which led to Valentin drugging his drink. Now Robert’s presumably being held against his will. So what can we learn from Rogers’ General Hospital spoilers? For starters, Robert must be OK. It’s doubtful he could rush in the Nurses Ball if he was sick from poison. The drug must be something that’ll wear off and leave Robert healthy enough for this mission.

Rogers also believes GH fans will like what’s ahead, so that backs up the idea that Robert’s going to be just fine. In fact, it suggests that Robert will step up as a hero! Perhaps Robert overheard something in his drugged state. He might’ve caught Valentin on the phone with Peter or heard another minion mention Peter’s name. It’s possible that Robert will be the one to expose Peter as Heinrik.

Even if Robert simply tells Anna Devane (Finola Hughes) the truth, that’ll be a huge Nurses Ball shocker. General Hospital spoilers say Peter’s going to feel the heat soon, so don’t miss what’s in store. We’ll give you updates as other GH news comes in. Stay tuned to the ABC soap and don’t forget to check CDL often for the latest General Hospital spoilers, updates and news.