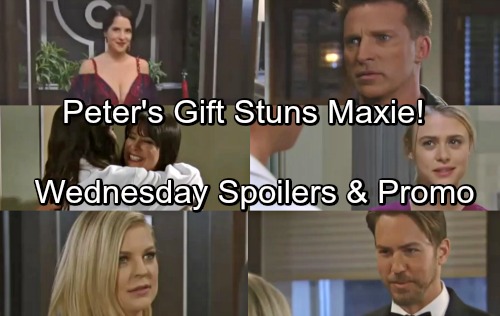 General Hospital (GH) spoilers for Wednesday, May 16, tease that the Nurses Ball will finally kick off. Nick Viall will be this year’s red-carpet host. He’ll interview plenty of guests at 2018’s long-awaited event, so be on the lookout for some glammed-up GH stars.

Liz (Rebecca Herbst) and Franco (Roger Herbst) will certainly be dressed to the nines. When they go on camera, Liz will gush that they’re in for a real treat tonight. She’ll be excited about seeing some terrific performances and raising money for an important cause.

Over with Finn (Michael Easton), he’ll be taken aback by Alexis’ (Nancy Lee Grahn) beauty. He’ll insist that she looks incredible, so Alexis should appreciate the compliment. She’ll undoubtedly suggest that Finn doesn’t look so bad himself! These two will make an attractive duo on this significant evening.

Meanwhile, The Chew’s Carla Hall will also pop up. She’ll play a chef who gets caught in Olivia’s (Lisa LoCicero) mess. General Hospital spoilers say Olivia will deliver a desperate plea. She’ll declare that Hall’s character is her only hope, so it looks like she’ll get the help she needs.

At GH, Kiki (Haley Erin) will be a bit suspicious. It looks like Dr. Bensch (James DePaiva) will once again try to butter her up. Kiki will flash a nervous smile and ask if this is a trick. Since we’re talking about creepy Dr. Bensch here, the answer must be yes! The doc will play it cool, but Kiki should really watch her back around this guy.

Other General Hospital spoilers say Peter (Wes Ramsey) will have a lovely gift for Maxie (Kirsten Storms). He’ll surprise her with something special as they head off to the Nurses Ball together. Disaster’s brewing for Peter, so he’d better enjoy the peace while it lasts!

Elsewhere, Anna (Finola Hughes) will enthusiastically greet Robin (Kimberly McCullough). She’ll wrap her arms around her daughter and shout that she looks wonderful. Anna will definitely love having Robin and Emma (Brooklyn Rae Silzer) in town, but she may struggle to hide her worries.

While the fun of the Nurses Ball gets underway, Carly (Laura Wright) will remain stuck in lockup. General Hospital spoilers say Sonny will relay his fears to Jason (Steve Burton). He’ll be afraid that Carly’s breaking down. Sonny can’t shake the feeling that his wife’s spiraling out of control, so he’ll want to help her in any way he can.

Later, Jason will rely on Spinelli (Bradford Anderson) for assistance. Perhaps they’ll get a step closer to Heinrik on Wednesday. Sam (Kelly Monaco) could get closer to the truth as well. Her Peter plan will be spoiled, but don’t expect her to throw in the towel. Sam will keep digging, so she’s bound to come up with something soon.

The drama’s about to heat up on GH, so don’t miss all the action. We’ll give you updates as other news comes in. Stay tuned to the ABC soap and don’t forget to check CDL often for the latest General Hospital spoilers, updates and news.