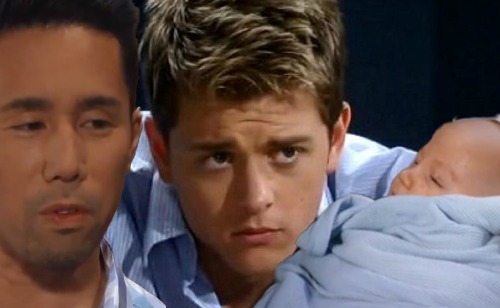 General Hospital (GH) spoilers tease that Michael (Chad Duell) will try to move on with his life. He’s been focused on bringing Nelle (Chloe Lanier) down and preparing for the baby, but he won’t have to worry about any of that now. Nelle was indeed arrested, so Michael will feel good about that.

However, Michael no longer has a bundle of joy to bring home from GH. He believes his kid’s dead, so this will be a real struggle. Nelle’s upcoming escape attempt will spark more chaos, but let’s focus on the baby issue for now.

Michael will continue to feel responsible for his son’s demise. He was appalled that Nelle would blame him, but he could see her point deep down. That doesn’t mean Michael’s letting Nelle off the hook for her role in the mayhem. If Nelle hadn’t been so crazy and out of control, Michael and Chase (Josh Swickard) wouldn’t have had to go after her.

Nevertheless, it was awfully reckless to get in the car and speed with a nine-month pregnant woman. They were just begging for trouble. Despite Michael’s claims, there was no reason they couldn’t wait until after the baby was born. This whole plan could’ve been delayed a bit and still worked just fine.

Now Michael feels like he’s going to miss out on a lifetime of memories and fulfillment. General Hospital spoilers say things could get even harder when he runs into Lucas (Ryan Carnes) and Brad (Parry Shen). They’ll have “Wiley” with them, so Michael will want to meet the little fella. He’ll unknowingly hold his son for the first time!

Meanwhile, guilty Brad will watch in silence. He’ll hate what Michael’s going through, but Lucas would be facing the same heartbreak without the switch. That’ll be enough to keep Brad’s mouth shut. Once the “Brucas” baby bonding has begun, Brad just won’t be able to back out.

Instead, Brad will see an emotional Michael cuddle his precious boy. Will Michael feel a connection with the baby? Regardless, he’ll inevitably get choked up as he hands “Wiley” back. Michael will be reminded of his crushing loss, so that’ll add to the drama.