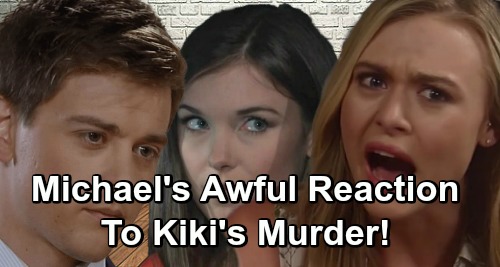 General Hospital (GH) spoilers tease that Michael (Chad Duell) could face a tough setback. GH fans know Michael has really struggled since the “death” of his baby with Nelle (Chloe Lanier). It took Michael a while to accept that he was going to be a father to Nelle’s child, but he ultimately chose to focus on the kid alone. Michael became determined to protect his baby from his crazy mother.

However, Michael clearly couldn’t do that since Nelle managed to swap their kid for Brad (Parry Shen) and Lucas’ (Ryan Carnes) dead one. That bombshell will be revealed down the road, but Michael’s struggles will continue for now. Things were getting better thanks to that bereavement group, but some startling news could cause another stumbling block.

General Hospital spoilers say Michael will get updates on Kiki’s (Hayley Erin) murder. This senseless act of violence should leave Michael heartbroken and bitter. Michael will certainly mourn the loss of his good friend. It should bring back all kinds of painful memories – like losing Sabrina (Teresa Castillo), Morgan (Bryan Craig) and of course, Jonah.

Now Michael will have to add Kiki to the list of loved ones gone too soon. Michael just wants to move on, but he keeps taking hit after hit. Kiki’s demise could easily leave him in a dark place. Michael might let himself fall back into a grief trap as he dwells on all the people who have been taken from him. How can he let go of his sorrow when life keeps throwing terrible curveballs at him?

Fortunately, there’s someone who might be able to help Michael through this. He seems quite charmed by Willow (Katelyn MacMullen), Aiden (Jason David) and Charlotte’s (Scarlett Fernandez) secretive teacher. Willow will definitely remain in Michael’s orbit, so this would be an excellent way to use her.

As Michael grapples with more pain, he may open up to Willow somewhat. Since she’s also been attending the bereavement group meetings, Willow’s one of the few people who really understands Michael right now. She had a touchy reaction to Nina’s (Michelle Stafford) question about her having children, so she may have lost her own. That could be a hint that Willow is the anonymous birth mom.

If so, Willow may reveal some clues to Michael down the road. She could play a big role in helping Michael solve the baby swap mystery. Whatever the case, Michael’s situation will get worse before it truly gets better. We’ll keep you posted as other General Hospital details emerge. Stay tuned to ABC’s GH and don’t forget to check CDL often for the latest General Hospital spoilers, updates and news.