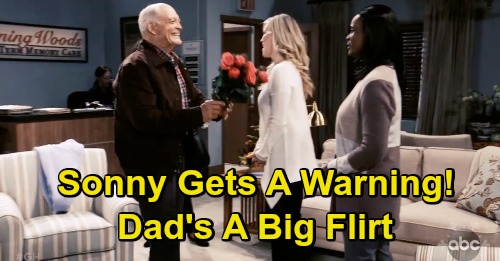 General Hospital (GH) spoilers tease that Mike (Max Gail) is about to get into some big trouble. He’s been enjoying his time at the adult day care program, and he recently told Stella (Vernee Watson) that he’d met a lovely lady there named Yvonne (Janet Hubert). It seemed great that Mike was branching out and enjoying himself, with a lady friend to boot!

But it never crossed Stella’s mind to ask Mike about Yvonne’s marital status. And it looks like Yvonne is going to be married. Viewers haven’t yet met Yvonne, but it’s possible that her memory difficulties are more severe than Mike’s right now. It could be a very difficult and sad situation in which Yvonne doesn’t always (or ever) remember that she’s a married woman.

If that’s the case, then Mike might not even realize that Yvonne is married. Nevertheless, the situation is going to cause some pretty major problems. In this week’s GH promo video, Mike is shown bringing flowers to Yvonne, so it’s clear that he’s actively pursuing her.

Then the situation is going to get even more complicated because it seems that Stella’s old flame Marcus (Nigel Gibbs) is Yvonne’s husband. Marcus recently told Stella that he was in Port Charles because his wife was being treated there. And the new GH promo shows Marcus confronting Sonny (Maurice Benard) and telling him to keep Mike away from his wife!

The whole situation will be unfortunate and will probably put Stella in an awkward position between Mike and Marcus. As Mike’s social worker, Stella will be involved in the drama and will end up having to address the issue with Mike. Mike likely won’t have intended to cause an issue, but it looks like Marcus won’t be too happy with someone “preying” on his sick wife.

Do you think Stella will be able to smooth things over between Mike and Marcus? Stay tuned to the ABC soap and don’t forget to check CDL often for the latest General Hospital spoilers, updates, and news.