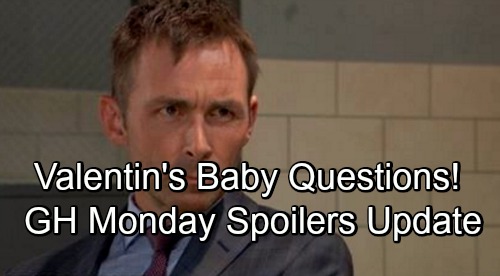 General Hospital (GH) spoilers update for Monday, August 20, tease that Michael (Chad Duell) will prepare to bury his son. He’ll confide in Chase (Josh Swickard) as he deals with his grief, but GH fans know Jonah’s still alive and well. Thanks to Brad (Parry Shen) and Nelle’s (Chloe Lanier) baby swap, Jonah’s believed to be Wiley. Of course, the birth mom wants him back and that leaves Brad with a big problem.

While Brad starts to sweat, Lucas (Ryan Carnes) will be in shock over the situation. He knew this was a possibility, but it’s rough now that it’s actually happening. Lucas will ask Alexis (Nancy Lee Grahn) what their options are. He may hope they can somehow get in touch with the birth mom and change her mind.

Unfortunately, Alexis will suggest that they can’t really do anything. They agreed that the birth mother would remain anonymous, so they have to honor that agreement. Likewise, this woman legally had 30 days to demand the return of her child. Alexis may gently urge Lucas to accept the circumstances and try to cope with the pain.

However, Brad will refuse to give up. There’s just too much at stake on his end! Brad doesn’t want to give Michael’s kid away and tear apart the family he’s building with Lucas. As a result, Julian (William deVry) will face an urgent request.

He’ll be surprised when Brad approaches him and asks for assistance. Brad will begin his crazy baby tale, but Lucas will butt in and delay the rest of the story.

Nevertheless, Brad will manage to track Julian down later. He’ll explain that “Wiley” isn’t the same baby he started out with, so Julian will hope to figure something out. After seeing the joy in Lucas’ eyes, Julian will hate the idea of letting him endure this loss.

Other General Hospital spoilers say Nina (Michelle Stafford) will offer Maxie (Kirsten Storms) a promotion. While Maxie prepares to take on more Crimson duties, Lulu (Emme Rylan) will have a conversation with Peter (Wes Ramsey). He’ll push her to take a job at The Invader, which he recently purchased and hopes to steer in a more reputable direction.

Lulu will turn Peter down, but there’s a chance he’ll win her over eventually. Peter can be awfully sneaky, so you never know what he’s got up his sleeve. In prison, Valentin (James Patrick Stuart) will interrogate Madeline (Donna Mills). He’ll seek the scoop on Nina’s past and the possibility that her daughter’s survived.

Over with Margaux (Elizabeth Hendrickson), she’ll lash out at Drew (Billy Miller) the “paranoid egomaniac.” Drew may contend that Margaux’s following him again, which she clearly is. He also knows about Margaux’s takedown mission. She wants to be the DA that finally puts Sonny away for his crimes, so Drew may think she’s still trying to talk him into it.

Luckily, Drew’s pretty good at easing the tension. He’ll grin and crack a joke or two, so Margaux will probably lighten up sooner or later. Over with Sonny and Carly (Laura Wright), they’ll debate the risks to Sonny’s freedom. It appears Sonny will open up about the body and the gun, so Carly will be filled with dread.

Sonny will promise that he’s got it covered, but that won’t stop Carly from worrying about his fate. We’ll give you updates as other General Hospital news comes in. Stay tuned to ABC’s GH and don’t forget to check CDL often for the latest General Hospital spoilers, updates and news.