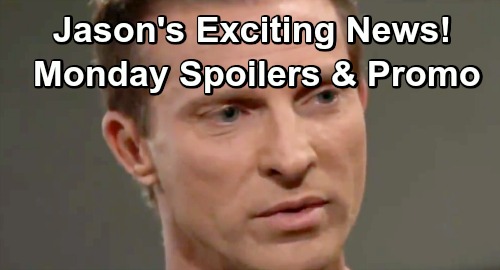 General Hospital (GH) spoilers for Monday, December 17, tease that Danny (T.K. Weaver) will get some exciting news. When he realizes his daddy’s coming home with him, he’ll be on cloud nine. Jason (Steve Burton) will look forward to enjoying some extra time with Danny and Sam (Kelly Monaco) as the holidays approach. He’ll tell Sam that all he wants for Christmas is to spend it with her.

Meanwhile, Lulu (Emme Rylan) will nudge Charlotte (Scarlett Fernandez) toward doing the right thing. It seems her speech finally got through to the little bully. Charlotte became emotional over the pain she’d been inflicting, so she appears to get the picture now.

Of course, actually apologizing to Aiden (Jason David) could still be difficult. Lulu and Laura (Genie Francis) will keep Charlotte focused, but the real drama could come from Liz (Rebecca Herbst). She may be upset that Lulu, Valentin (James Patrick Stuart) and Nina (Michelle Stafford) let this go on for so long. They didn’t know Aiden was the victim, but they knew Charlotte was the culprit.

Unfortunately, even more family chaos is ahead for Liz. GH spoilers state that Franco (Roger Howarth) will have some updates to pass along. He’ll admit that Liz isn’t going to like what he has to say. Cameron (William Lipton) called off the weed deal, but he’ll change his mind soon enough. Franco may realize Cam was lying about his drama club bake sale and raise Liz’s suspicions.

Liz will get a call from the cops within the next episode or two. She’ll inevitably flip out over her son’s latest run-in with the law. It looks like Cameron will get busted for buying pot after all, so that’ll be another nightmare for Liz to deal with.

At Turning Woods, Mike (Max Gail) and Yvonne (Janet Hubert) will lean in for a kiss under the mistletoe. Carly (Laura Wright) and Sonny (Maurice Benard) expected a sweet moment, but General Hospital spoilers say Marcus (Nigel Gibbs) will quickly derail it. He’ll undoubtedly hit the roof over the way Mike’s making moves on his wife.

Carly will try to step up as peacemaker here, but that’s going to be tough. Marcus has quite a temper when it comes to Yvonne and protecting her. He’ll make it clear that Mike and Yvonne’s connection just isn’t going to work for him. The whole confrontation could cause another setback for Mike, so it sounds like a real mess is brewing.