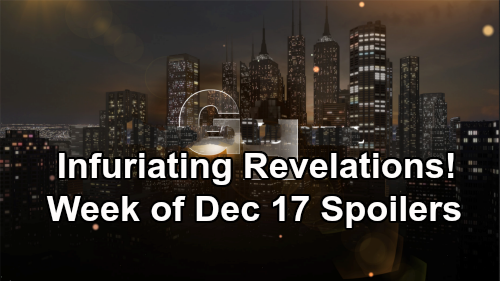 General Hospital (GH) spoilers for the week of December 17-21 tease that some shockers are coming up in Port Charles. First, Liz (Rebecca Herbst) will get some stunning news. After Lulu (Emme Rylan) mulls over Laura’s (Genie Francis) revelation about Aiden (Jason David), it appears she’ll decide to come clean to Liz. Lulu may track Liz down and admit that Charlotte’s (Scarlett Fernandez) the bully.

Laura will be filled with pride this week, so maybe she’ll praise Lulu for how she’s handling the situation. Liz, on the other hand, will be absolutely livid. Her son’s been tormented and that’s just not OK. Later, Cameron’s (William Lipton) arrest will also leave Liz reeling. He’ll get busted with some recently purchased pot, so this family will have more issues to deal with.

Over with Sam (Kelly Monaco), she’ll face growing anxiety. Some mysterious emails will let Sam know that real trouble’s brewing. She’ll fear the threat, but Jason (Steve Burton) will do his best to console her. General Hospital spoilers say they’ll tackle this crisis together, so GH fans can look forward to some warm “JaSam” moments.

Meanwhile, Chase (Josh Swickard) will get grilled. Lulu will demand some answers, so there are a couple of possibilities here. It’s possible Lulu will want info on the murders for a new story, but this could be a personal interrogation instead. Lulu might want to know all about Chase and Willow’s (Katelyn MacMullen) first date.

Chase will hope to score another date soon enough. He’ll track Willow down and turn on the charm again, but what about Michael (Chad Duell)? As Chase works to get to know Willow a bit better, the competition could quickly heat up.

Other General Hospital spoilers say Kristina (Lexi Ainsworth) and Sam will spar. Will this have something to do with the cult Kristina’s fallen into? Sam may object to one of Daisy’s (Kelsey Wang) principles and leave Kristina upset. Regardless, these sisters will find themselves at odds this week.

Across town, Sonny (Maurice Benard) and Carly (Laura Wright) will encounter conflict as well. They’ll go to war over Margaux (Elizabeth Hendrickson), so some marriage struggles may be brewing. Margaux will also find an interesting clue this week. Maybe it’ll be something that could help Jordan (Briana Nicole Henry) out with the murder investigations. She could definitely use some assistance!

Finally, Nina (Michelle Stafford) will cope with a bombshell. Will this involve Valentin (James Patrick Stuart), Sasha (Sofia Mattsson), Liesl (Kathleen Gati) or perhaps the Charlotte drama? Whatever the case, Nina will have a lot on her mind!