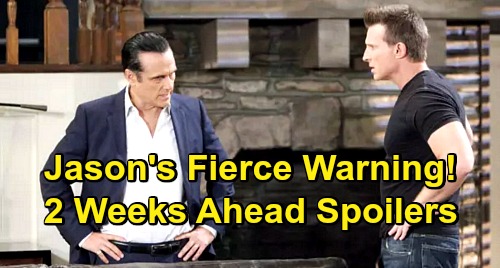 General Hospital (GH) spoilers tease that Sonny (Maurice Benard) will ignore Carly’s (Laura Wright) complaints. She found out about the scarf Sonny loaned Margaux (Elizabeth Hendrickson) and hit the roof. Carly doesn’t like the idea of Sonny getting too comfortable with her enemy, but that’s exactly what’s happening.

Sonny even tried to blame Diane (Carolyn Hennesy) for losing Carly’s court battle instead of holding the DA responsible. GH fans know Margaux was focused on taking down a Corinthos, but Sonny’s guilt is clouding his view right now. He doesn’t like that he caused Margaux pain by killing her father.

Mike’s (Max Gail) rapidly declining as well, so that’s another reason why Sonny’s vulnerable. His connection to Margaux could be dangerous, especially when it comes to his marriage. Jason (Steve Burton) tried to settle Carly down, but it seems he’s truly worried. He knows Sonny better than just about anyone, so he can sense that drama’s brewing.

As Sonny’s bond with Margaux grows, Jason will decide to take action. He cares about Carly, Sonny and their relationship. Jason won’t want to see Sonny head down a dark road and destroy his life. General Hospital spoilers say Jason will corner Sonny on December 27. He’ll want to get a few things straight about Margaux.

Jason will undoubtedly remind Sonny of all the turmoil they faced with DA Dawson. He won’t want Sonny to let his guard down for many reasons, but Carly will be the biggest one. Jason won’t care if there’s actual cheating potential or not. He’ll feel like Carly believes there is and that’s all that matters.

GH spoilers say Sonny will once again downplay his connection to Margaux. He’ll think everyone’s blowing this out of proportion. However, Jason won’t give up. His instincts will tell him that this is a bad idea, so he’ll give Sonny a stern warning.

Jason will insist that Sonny needs to steer clear of Margaux. He’ll contend that Sonny can’t let himself get any closer. Jason won’t think Margaux can be trusted and he won’t like the toll this is taking on Carly. He’ll push Sonny to see the chaos he’s causing and just keep Margaux at a distance.

Of course, Sonny always does whatever he wants anyway. He often gets advice from Jason, but that doesn’t mean he has to use it! General Hospital spoilers state that Sonny could regret not listening to Jason. Margaux is clearly trouble – even when she doesn’t mean to be.

Is this the start of “CarSon” crumbling? Are Sonny and Carly headed for a divorce at some point? We’ll give you updates as other GH news comes in. Stay tuned to the ABC soap and don’t forget to check CDL often for the latest General Hospital spoilers, updates and news.